The group’s “Biography” on its Facebook page states: “We are Musicalchemichal, visualchemical, renaissance rock n’ roll from Melbourne, Australia.” 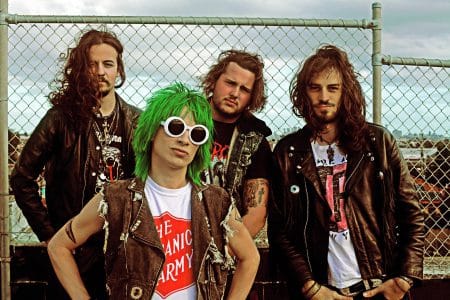 Speaking exclusively to Sleaze Roxx, Blatchly explained how White Devil Detroit got formed as he stated: “Kyle and I began writing music a few years back when we met in Brisbane, after our previous bands played a show together, for what was going to just be a slow burn studio project. But then, we both found out we were moving to Melbourne at the same time and were like ”Fuck it! Let’s start a whole new band down there.” We then moved here and found Jayden — he thought we sucked the first time we rehearsed with him [laughs] — because I had Jayden as a friend on Facebook for yeeeears and knew he was into stuff like Skid Row and AC/DC. I found Dave by combing through the catacombs of Facebook and saw him holding a bass in his profile picture. So we can thank [Mark] Zuckerberg for me being able to find our badass rhythm section. We formed in late 2016, began playing shows in early 2017 and now we’re all best mates.”

In terms of how the band came up with its name, Blatchly advised: “I was homeless, living in Sydney and broke as a joke when I came up with the name White Devil Detroit. It was a really strange time. I had my first ever anxiety attack and was in a massive downward spiral. I call that time my ”Kelly Slater of couch surfing tour.” The name was inspired by a YouTube comedy skit from the comedian Bobby Lee. In one of his skits, he looks dead pan into the camera and says ”I always go to Detroit to get my crack cocaine because that’s where it’s the purest” so my line of thought was ”Okay, crack is white and it puts the devil into people, addiction really fucks people up like they’re possessed and in this comedy skit, Bobby Lee said it was its purest in Detroit.” So that’s where the name comes from. I held onto it for two years before I even met Kyle, Dave or Jaydizzle. I really like the name too because it doesn’t have that immediate connection to a particular genre. It could be the name of a hip hop group or a screamo band. It’s ambiguous and has no immediate connotations.” 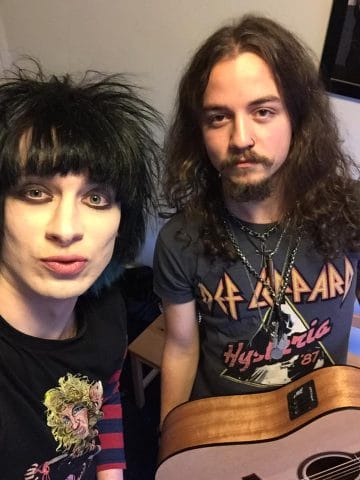 With respect to the band’s slightly odd description of itself, Blatchly indicated: “Alchemy is the union of opposites, the inner alchemical marriage. Think of White Devil Detroit as a collage. At our core, what we are is straight up rock n’ roll band like Guns N’ Roses, AC/DC, Alice In Chains, etc. So I take what we are at that core and then hot glue other parts of the musical landscape / history, pop culture, the occult, fashion, etc over the top of that core.

The “Musicalchemical” is a reference to how we take that hard rock sound and melt it with goth, hip hop, pop, funk, etc. Or how I write lyrics the way Quentin Tarantino puts together movie scenes… I’ll have one line that is in reference to a cartoon but it also works as a metaphor for the story I’m trying to tell. The “visualchemical” side is how I’ll see something Salvador Dali wore, cross it with some Run DMC fashion and polish it off with some Club Kid make-up or how most bands will use pyro onstage but I blow bubbles…. Just fusing and polarizing opposites to create something completely new.

A lot of bands in our scene would describe themselves like “We’re fusing ’80s metal with a modern hard rock edge.” I couldn’t be less interested in your band if that’s all you’re doing. It’s been done. I’m all about pushing the envelope and breathing some new air into the collapsing lungs of this ’80s metal throwback scene…. Like yeah, we sound like AC/DC and Guns N’ Roses… That’s our core but do I want to write lyrics like they do or look like they did? Nope. Let’s add extra stuff to the music too! We just do what comes naturally to us and it makes us stand out and now we’re creating something completely fresh and new.

“Renaissance rock n’ roll” is a term I came up with to describe us. It’s derived from the term Renaissance Man which is a polymath or somebody who is good at at many things. We’re not just one trick ponies, pigeon holing ourselves into some little box. White Devil Detroit is a stunt crew, performance art troupe, magical fellowship, stand up comedy show and much more as well as a rock n’ roll band. It keeps things fun and interesting. All of our shows are completely different. We have one coming up February 23rd at The Bendigo Hotel in Melbourne called White Devil Detroit presents: Chaos Musick. This show’s inspiration is chaos magic, discordianism and glamour. It’s going to be like an episode of Ru Pauls Drag Race playing crossed with a GG Allin show in a dive bar in outer space with Guns N’ Roses playing on a broken jukebox in the background.”

Here it is! We are gee’d up from the feet up to bring you our long awaited debut music video! Our single “Cummin’ Down” is coming to your earholes right now!…