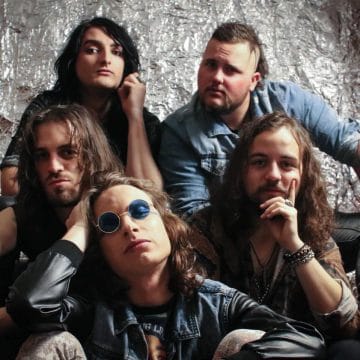 “White Devil Detroit play Renaissance Rock n’ Roll. We have our hands in a bunch of different hats combining the hard edge of bands like the Sex Pistols and Judas Priest with the nihilism of Eric Andre and the surrealism of Salvador Dali and everything apart and in between. Its alchemy. A musicalchemical, visualchemical rock n’ roll show.”

Speaking to Sleaze Roxx, Blatchly explained why the group added a fifth member as he stated: “We had tossed around the idea of adding a fifth member for a long time and Banjo was a good mate who just ticked all of the boxes and fulfilled all of the needs — everything that the band was missing in regards to songwriting and instrumentals. He has brought our music to another level. We needed someone to fill the void and he has the whole Izzy Stradlin / Johnny Marr archetype, so he slid in naturally. Doesn’t hurt that he’s also a really good mate and already looks like a rockstar too.”