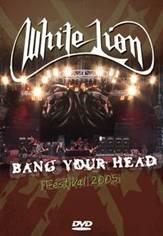 WHITE LION “BANG YOUR HEAD” DVD OUT IN DECEMBER:

Frontiers Records is pleased to announce the release of WHITE LION “Bang Your Head Festival 2005” DVD on December 5th 2008.

White Lion left its musical mark in the late 80’s with a series of highly acclaimed albums including “Mane Attraction”, “Big Game” and the million seller “Pride” which spawned such hits as “Wait” and “When The Children Cry”. The band was also recognized for its signature album tracks that transcended socio-political themes such as “Lady Of The Valley”, “Cry For Freedom”, “Lights N Thunder” and “Warsong”.

White Lion originally disbanded in 1991 and it wasn’t until 2005 when singer Mike Tramp decided to handpick a handful of musicians (including Jamie Law on guitar, Troy Patrick Farrell on drums, Henning Wanner on keyboards and Claus Langeskov on bass) to carry again the flag of White Lion in a long European tour that culminated in a successful apparition at the “Bang Your Head Festival”. In Tramp’s own words “this concert was the definitive turning point and event that finally convinced me that it was worth going on with the next chapter of White Lion and that rock fans had not forgotten and still appreciated the music of White Lion”.

And indeed this DVD reflects the magic of an unforgettable night with amazing renditions of all the band’s hits and signature songs. A testament of what was and a statement for the future who brought the successful studio return album “Return of the Pride” released in March 2008.