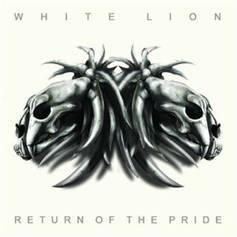 Frontiers Records is pleased to announce all the details surrounding the highly anticipated come back studio album from WHITE LION entitled “Return of The Pride”.

All the trademarks of the White Lion classic sound can be found again in the new album which offers a musical variety that covers the entire musical spectrum the band is well know for. “Return Of The Pride” kicks off with “Sangre de Cristo”, a thunderous epic that ventures into lyrical and musical territories best heard, than described. “Battle At Little Big Horn” is the album’s other soaring epic, a musical re-enactment of one of Native America’s most significant historical event’s: Custer’s Last Stand. Hook laden rockers such as “Dream”, “Live Your Life” and “Finally See The Light” maintain a positive musical and lyrical vibe throughout the album, whereas “Gonna Do It My Way” and “Let Me Be Me” are the modern day “Living On The Edge” songs of rebellion.

“Return of The Pride” will include the following songs:
Sangre de Cristo; Dream; Live Your Life; Set Me Free; I Will; Battle at Little Big Horn; Never Let You Go; Gonna Do It My Way; Finally See The Light; Let Me Be Me; Take Me Home (European Bonus Track).

The album was produced by singer Mike Tramp and bassist Claus Langeskov and recorded during 2007 in both Australia and Copenhagen, Denmark, in between touring commitments.

White Lion is set to appear live in the summer 2008 with the plan to storm the European audiences. Get ready for the “Return of the Pride” to be released on Frontiers Records on March 14 with a release in Japan scheduled on King Records.