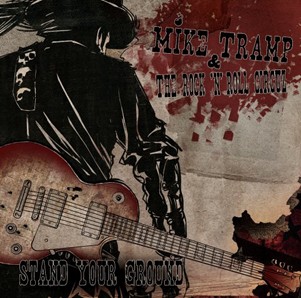 The White Lion singer wrote all the songs and the album was recorded almost live in Medley Studios in Copenhagen with Soren Andersen and Mike Tramp as producers. The album was mixed by Jacob Hansen (known for his work with Volbeat, The Storm, Surfact and others). The cover artwork was made by Karsten Sand who has worked with Volbeat on their album covers.

Mike Tramp’s tribute to Ronnie James Dio, “Hymn To Ronnie”, will be a bonus track on the Danish version of ‘Stand Your Ground’. You can still listen and download the song on ReverbNation at http://www.reverbnation.com/miketramp.