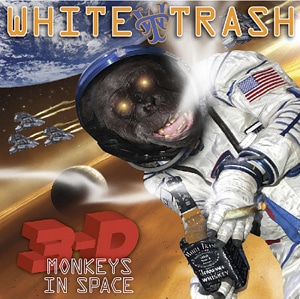 Between the end of the late-80’s Hollywood hair band scene and the rise of what became called “Grunge,” a lot of bands with a lot of talent slipped in the mass-marketing cracks. One of those bands was NYC’s WHITE TRASH.

After a hot Buzz-Bin video on MTV (APPLE PIE,) suddenly WHITE TRASH found themselves unfairly lumped in with the hair bands, and soon, the only airplay they got on MTV was “The Crawl” being used as the theme to Jon Stewart’s old show (not that anyone really knew who did it anyway). Considering it’s 10 years old, it’s amazing how fresh it sounds, and it’s entirely possible that if this band had come out of Southern Cali in 1997 rather than out of NY in 1990, their outlook might have been a little brighter……

BUT NOW THE PIONEERS OF 90’s FUNK/METAL RETURN TO THE SCENE WITH A BRAND NEW ALBUM “3D Monkeys in Space! Download 6 of the 8 new tracks at www.digstation.com. The other two tracks are only available on the CD which can be purchased at www.whitetrashuniverse.com and www.myspace.com/whitetrashbuzz.