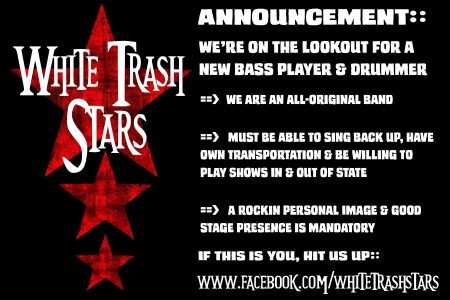 Philadelphia, Pennsylvania, USA rockers White Trash Stars are now looking to replace half of their line-up as following the announced departure of bassist Mal Hyde in early November, the sleaze rockers have now advertised that they are looking to replace their entire rhythm section since they are seeking a new bassist and drummer.

No formal announcement has been made regarding the departure of presumably drummer E-Money. The remaining White Trash Stars members are lead vocalist Caz F and guitarist Ray Ray D.

Rockin personal image is mandatory…Must be able able to sing back up, have own transportation and willing to play shows in and out of state…If this is you, hit us up ☆☆☆”