Philadelphia, Pennsylvania, USA rockers White Trash Stars are looking for a new bassist after the departure of their bassist Mal Hyde who played on their EP Volume From The Outside released last year. 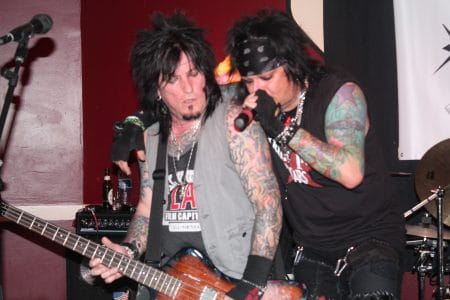 “☆☆☆ ANNOUNCEMENT: White Trash Stars bass player, Mal Hyde has chosen to move in a different direction and while we’re disappointed and sad to see him go, we will be looking for a new bass player immediately..

Rockin personal image mandatory…Must be able able to sing back up, have own transportation and willing to play shows in and out of state…If this is you, hit us up..☆☆☆”

Sleaze Roxx saw White Trash Stars perform at the M-Pre Party in Columbia, Maryland, USA back in early May 2018 and stated as follows in its concert review:

“Philadelphia, Pennsylvania, USA rockers White Trash Stars are the one band that I knew the least going into this year’s M-Pre Party. I couldn’t find that much on them online when I did a preview of the M-Pre Party‘s line-up (at the time as Station were subsequently added) on Sleaze Roxx back in December 2017. Accordingly, I was quite intrigued to see White Trash Stars play. The group’s presentation was what it must have felt like seeing Mötley Crüe in the early days. The group had two fake large fire flames that were nestled on each side of the drum kit on I believe some speakers. The band must have brought its own smoke machine, which was activated throughout the set. White Trash Stars bassist Mal Hyde looked really really similar to Nikki Sixx from his spiked up hair, small goatee (if I can call it that) and all his tattoos. Lead vocalist Caz F looked like a cross between Sixx and Poison‘s Bret Michaels. Guitarist Ray Ray D had a jacket blazer on, a few scarves and some black nail polish giving him a more subdued look just like Mick Mars always had compared to his other Crüe bandmates. Drummer E-Money looked like a little bit like a smaller version of Lee.”

White Trash Stars performing “Run Away” at Whiskey Tango in Philadelphia, Pennsylvania, USA on May 28, 2017: