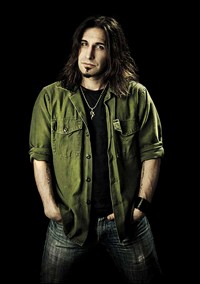 Whitesnake regret to announce that powerhouse drummer Brian Tichy has told David Coverdale that he is leaving the band to pursue the S.U.N. project he started with gifted singer/guitarist Sass Jordan. Bassist and singer Michael Devin, also a participant in S.U.N., will remain with Whitesnake.

Coverdale said, “We are truly sad to see him go, but, we fully support the pursuit of his ambitions and sincerely wish him well. His fearless drumming brought a relentless driving edge to our music that we fully embraced. Good Luck, Brian… May the SUN shine brightly on you!!”

Tichy stated, “I gave 100% while in the band, with full intent on making David and the Snakes proud I was behind them as their drummer. If still in Whitesnake, I would yet again be giving DC and the guys 100% in 2013, and I’d have a blast doing it! I will never complain about being paid to be an adult that plays in the bands he used to practice to since he was 9 years old! And I will never ever give less than 100% when behind a kit of drums because it is my life. It ties everything together for me. The change of musicians in bands is nothing new. My idols left this band too. But I do think my reason is a little different than the others.”

“Life is short. Each year is a solid chunk of time to hopefully get closer to all the things you have thought of attempting to achieve throughout your whole life. My December 30th mountain bike accident and January 1st surgery had absolutely nothing to do with my decision; but it certainly made it all the more easier to write it down with total clarity and without any second guessing. I’ve always played guitar. I’ve always written music. I’ve always wanted to be in my band! I have a new band, S.U.N., that I am beyond proud of. It is with a person, singer Sass Jordan, who is also as passionate about music and our band as I am. We sit on the same page in S.U.N. without worry about the other person’s level of commitment. Sass is a lifer in music. She only does this. And she does it better than most. When you have something like that sitting at your fingertips and you both truly believe in it, you don’t just put it on the shelf. What you do is figure out HOW you are going to make this new band AND everything else in your lives work together, regardless of the looming uphill battle and tiny percent ratio of something like this becoming a true force to be reckoned with. But, that’s where the confidence and experience come into play. I’d like to think we made a record that is a solid piece of rock that will hold its own next to anything. How will I know if I am right or wrong if I just “talk talk talk” about it? I’ve got live it and let this band have a fair shot, or else I might as well just call it “a cute little project I do if I have free time.” Haha! That is boring and goofy. We’ve worked hard and we will work hard.”

“I can’t give it its fair shot if I am giving Whitesnake 100%. And like I said, Whitesnake is Whitesnake,” continues Tichy. “It rolls around the planet as a total and complete success, whether YOU like it or not. It just is. When David says, “let’s tour,” a lot of people become employed and have a solid amount of work for the year. So yeah, that’s a success right there. I owe David Coverdale a big, fat thank you for allowing me to be myself in his band. The man simply told me to play how I play and make his band and its music sound like a kick ass rock n roll freight train. He trusted me. He trusted that after having Paice, Powell, Dunbar, Aldridge, and Frazier, (some of the world’s best drummers!) I could be the guy to get the job done! I also thank him for treating his band with complete respect and always being open to tell stories and answer questions having to do with this biz and everything he has been through. You learn a lot from a guy like that when you shut up and listen. Come on, from Blackmore to Page??!!! Sorry, it don’t get bigger!”

“But mainly I owe David a thanks for all the inspiration and for clearly letting me see that if you want something, you better at least TRY to get it,” concludes Tichy. “I am going to try. I watch him onstage and offstage, and see this icon that took his amazing gift and worked it hard and watched it all pay off in ways that most cannot fathom. I will of course always be a drummer and continue to work as a drummer and do all the things that drummers do. But I am allowing there to be an open road that I can now attempt to fill with all the stuff I have yet to do; the main thing being S.U.N. Basically, it would be pretty badass, (as I told David) if down the road, he can see me and say, “Damn, Tichy went for it and did it.” With that, I intend on making David proud, proving lots to myself and getting S.U.N. out there and making a dent!”

Whitesnake have begun the search for a new drummer. There are several musicians already being considered.

A spokesman for the band said that this will not affect the forthcoming tour dates for 2013, which include seven confirmed Japanese dates. Tickets will be on sale in February. These are just seven shows of many more to come, so check the full tour schedule at www.whitesnake.com for new dates as they are added.