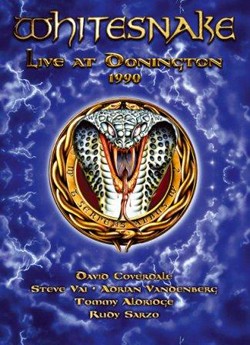 The fans demanded it…Whitesnake’s ‘Live At Donington 1990’ DVD/live double CD set will now be available on June 3rd in Europe and June 7th in North America, via Frontiers Records. Since the inception of Whitesnake.com more than ten years ago, this DVD has been the most requested product from fans of the ‘Snake.

On August 18th, 1990, Whitesnake headlined the legendary Monsters Of Rock at Castle Donington festival (now known as Download). Whitesnake’s performance at the festival was one of the most memorable events on the “Liquor & Poker World Tour” that saw the band play sold-out shows to over one million people. This incredible, never-before-seen, visual footage captures one of the most musically-intense Whitesnake line-ups performing in front 70,000+ fans. Mixed in glorious 5.1 and living, breathing stereo, it’s the next best thing to actually being there! Whitesnake 1990 featured guitar greats Steve Vai and Adrian Vandenberg, bassist Rudy Sarzo, drummer Tommy Aldridge and of course, incomparable frontman David Coverdale.

The ‘Live At Donington 1990’ DVD also includes a substantial gallery of never before seen stills of the band on the “Liquor & Poker World Tour 1990”, plus an intimate behind-the-scenes documentary of the making-of the SLIP OF THE TONGUE album. Please see below for the respective double CD and DVD track listings.

The ‘Live At Donington 1990’ will be available in 2CD set, DVD coverpack, combo 2CD + DVD in digipak and digital edition.

In other news, Whitesnake’s brand new album FOREVERMORE is out this week on Frontiers Records and is available in multiple configurations. The album is already receiving rave reviews from the press with The Aquarian dubbing it, “excellent…their bluesiest and grittiest release since their 1984 masterpiece SLIDE IT IN…”, while Hard Rock Hideout declares, “Make no mistake, FOREVERMORE, is an early front runner for record of the year.” FOREVERMORE finds founder/singer/songwriter David Coverdale and company returning to their no-holds-barred, bluesiest, sexiest rock n’ roll roots. Whitesnake is David Coverdale (vocals), Doug Aldrich (guitars), Reb Beach (guitars), Michael Devin (bass) and Briian Tichy (drums). The ‘Snake will soon hit the road in support of FOREVERMORE…please see below for tour dates.

Formed in 1977, and steered by the legendary David Coverdale, Whitesnake carry a rightful reputation as one of the world’s leading rock n’ roll bands. Coverdale’s blues roots, combined with a feral sense of rockin’ and rollin’, have consistently shaped the ‘Snake’s sound along with Coverdale’s love and appreciation of impeccable musicianship. Whitesnake’s ascent to the very top of the rock n’ roll heap was confirmed with 1987’s self-titled mega-platinum album, which saw two massive Top 10 hits, two #1 singles with “Here I Go Again” and “Is This Love” and a virtual 24-hour domination of MTV around the world.

Whitesnake LIVE AT DONINGTON 1990 CD 1 track listing:
1. Slip Of The Tongue
2. Slide It In
3. Judgement Day
4. Slow An Easy
5. Kitten’s Got Claws
6. Adagio For Strato
7. Flying Dutchman Boogie
8. Is This Love
9. Cheap An’ Nasty
10. Crying In The Rain (featuring Tommy Aldridge drum solo)