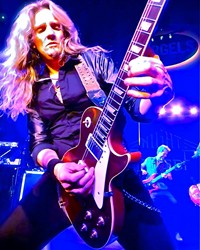 Three months after parting ways with guitarist Doug Aldrich, Whitesnake have announced that Night Ranger’s Joel Heokstra will be his replacement.

“One of the first, if not the first, guitarists to put his name forward after hearing that Doug Aldrich had left the band, was an exceptionally talented musician whom we had met briefly last year when his band opened for Whitesnake in Arizona,” stated Whitesnake founder and vocalist David Coverdale. “Everyone was very impressed by him, not only for his ability to play amazing guitar, but, also, his very agreeable personality and he was definitely foremost in our minds when we began to search for Doug’s replacement in Whitesnake.”

“We jammed together and were mutually impressed enough to ask him to join Whitesnake on the spot. This was May 30th, 2014,” continued Coverdale. “Joel is currently fulfilling his remaining tour dates with Night Ranger. We sincerely thank you all for your patience and understanding… and so, without further ado, we ask you to welcome, as we have done, our exceptionally gifted new Snake Brother… Joel Hoekstra… Guitarist Extraordinaire”

“Joel Hoekstra has just announced he will be departing the band to pursue other creative opportunities,” said the members of Night Ranger in an official statement. “We couldn’t be happier for Joel. The last 8+ years have been a blast and we wish him nothing but the best. Night Ranger will be announcing Joel’s replacement shortly. We are looking forward to the next chapter of Night Ranger, and traveling to Japan, Hawaii and venues across the United States, Europe and the UK in support of our new album High Road.”

Coverdale and Hoekstra, along with the other members of Whitesnake — Reb Beach (guitars), Michael Devin (bass), and Tommy Aldridge (drums) — are currently working on the follow-up to ‘Forevermore’, voted best album of 2011 by Sleaze Roxx readers. Regarding the upcoming release Coverdale has stated, “the new album is going exceptionally well… I couldn’t be happier.”