Whitesnake consisting of frontman David Coverdale, guitarists Reb Beach and Joel Hoekstra, bassist Michael Devin and drummer Tommy Aldridge have released a video for their live version of the song “Burn” from their upcoming album The Purple Tour (Live), which will be released on January 19, 2018. 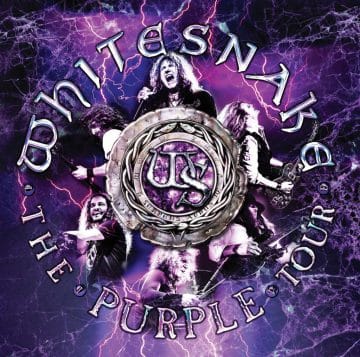 Sleaze Roxx stated the following in its review of Whitesnake‘s studio album The Purple Album back in 2015:

“What Coverdale and his latest all-star cast that make up Whitesnake — guitarists Reb Beach and Joel Hoekstra, bassist Michael Devin and drummer Tommy Aldridge — have done with these Deep Purple classics is truly amazing because the songs date back 40 years or more yet they all have that classic Whitesnake feel and sound to my ears. As is to be expected, all of the songs from The Purple Album emanate from the three Deep Purple records where Coverdale was involved.

Six of the eight songs on Burn are covered on The Purple Album. Five of the nine songs on Stormbringer have made their way onto The Purple Album and surprisingly, four tracks — albeit two of them bonus tracks — emanate from Come Taste The Band. Despite that there are a whopping fifteen tracks on The Purple Album if you count the two bonus tracks on the deluxe edition CD, I find that all of the songs are good ones with a lot of variety from anthemic scorchers such as “Burn”, “Stormbringer” and “Lady Double Dealer” to some slower tracks such as “Sail Away” and “Soldier Of Fortune”. This is likely because Coverdale simply chose the likely best tracks from the three Deep Purple records that he played on so The Purple Album ends up being a “best of” from the three Coverdale era Deep Purple records.”