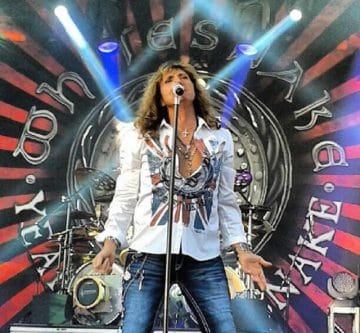 Coverdale was recently interviewed by Ultimate Classic Rock and asked what was happening in terms of new music. The singer replied: “Okay, this is what’s going on now – and a lot of people don’t know this. We obviously have the 30th anniversary [reissue] coming out at the beginning of October. On Black Friday, isn’t that November something? The 24th? We have the Purple live DVD [recorded during the band’s tour supporting 2015’s The Purple Album].”

Coverdale continued: “Yeah, it’s f—ing fantastic. I’m going from talking with you guys to finishing off the edit today. We’re doing the last tweaks and then delivering it to Warners. It’s kick ass. To promote it, we’ve put together Whitesnake as you’ve never seen them before on a video for “Burn.” It is un-f—ing-believable. It’s a full production video. And we’re still tweaking, but the people at Warners who have seen it, they’re mind blown by it. We worked with a young, hip gunslinger Canadian director called Tyler Bourns. And you owe me for that, Tyler! [Bourns laughs in the background as Coverdale also laughs.] And he’s kick f—ing ass. He did all of the videos with us on The Purple Album. He’s the head of our video creative ops, and a great guy as well. But also, probably around the same time, we have a f—ing huge – I call them coffee table books. It’s about the size of a f—ing huge encyclopedia, a historical photographic journey from the beginning of The Purple Album to the end of the last show in the U.K. in Sheffield. We were supposed to have this out for last Christmas, but I was so exhausted, coming off the road. So, better late than never. It’s still only a year and a half old. The book’s f—ing beautiful to have. It’s going to be a Whitesnake Christmas, without a doubt.

The studio album that we’re working on, we’ve never had such an immense amount of positive material. I’ve worked, for the first time as writers, with Reb Beach and with Joel Hoekstra. Because when Joel came in, we were doing The Purple Album, of course. And not only do we have great Coverdale/Hoekstra and Coverdale/Beach songs, but we have the three of us combining [as writers]. The songs are f—ing excellent. We have 18 or 19 extraordinarily positive, potent, juicy classic Whitesnake songs from balls to the wall to blues, to epics to ballads. It’s kick ass. It’s definitely got me fluffed up. That will be [coming out in] late spring next year. We’re looking at getting out [on tour] in the U.S. around June, so probably May.”

You can read the rest of the interview with Coverdale at Ultimate Classic Rock.