According to Whitesnake‘s website, the remaining tour dates for the group’s European Farewell Tour consisted of: 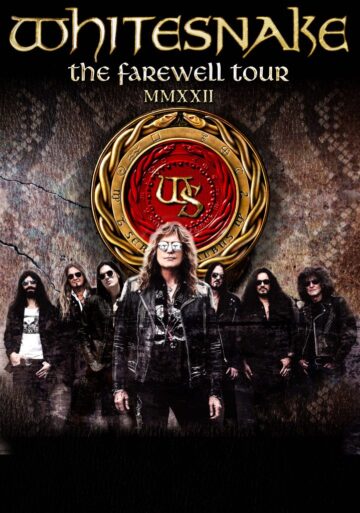 It is with the deepest sadness that I must announce that due to continuing health challenges, doctor’s orders, and our concern for everyone’s health and safety, Whitesnake is unable to continue its European Farewell Tour.

I extend my sincere apologies to All of Whitesnake’s Amazing Fans who have been looking forward to the remaining scheduled shows of this tour, All of our Amazing, Fabulous Snakes & tour personnel who have been working so hard to put on these shows, and All of the promoters and other professionals who have helped set up the tour…

I Appreciate & Love You All!!!

It has been a rough couple of weeks in the Whitesnake camp. The group was scheduled to play at the Rock Imperium Festival in Cartagena, Spain during the weekend of June 24 and 25, 2022 but apparently pulled out on the day that it was scheduled to perform due to drummer Tommy Aldridge not feeling well. 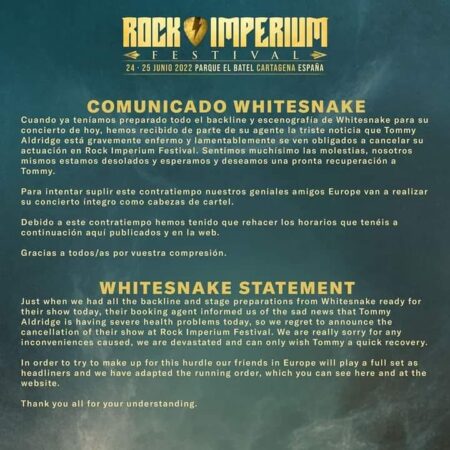 The Rock Imperium Festival organizers were apparently unhappy with these developments and they outlined (via their website) their version of what took place leading up to Whitesnake‘s cancellation:

2. Whitesnake’s team, backline, backstage and crew were already at the festival before 8am in the morning to prepare for the band’s performance, who weren’t there yet. Please check some pictures in this same statement.

3. By midday, almost all of Whitesnake’s backline and staging was already set up on stage.

4. At 1:23, we received a call from Whitesnake’s agent indicating that the band’s drummer, Tommy Aldridge, was very ill with a high fever and that they could not perform. We appealed to the band’s sense of professionalism so as not to leave fans stranded, but their agent was blunt, stating that the show was “100% cancelled by the band” and that Tommy Aldridge’s health was the reason for the cancellation. We asked him to send us a statement to inform fans and to send us the medical certificate justifying the cancellation. 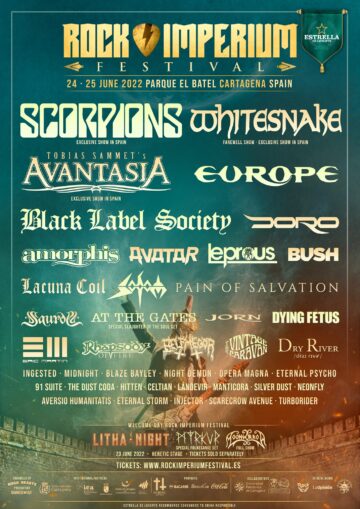 5. During the following hours we sent them emails and phoned them to urge them to send us both. But they didn’t answer the emails nor the phone calls.

6. At 2:50pm, with only 3h 40′ to go before Whitesnake’s performance, we uploaded the statement announcing the cancellation according to the reason they had given us.

7. At 6:15pm, they sent us an email with the following statement to replace the previous one:

Please know we are doing everything in our power to bring you the best high energy and exciting shows we possibly can. We always strive to deliver 100%, as Whitesnake fans always deserve that much, and never anything less.

Our desire is to complete our European tour with the same passion in which we started it!

We knew embarking on this tour could present many new obstacles and potential issues, which had been unknown to us on previous tours. Please know we are doing everything in our power to work through these unprecedented challenges. We are a close-knit band, we love each other, and we love you. We appreciate you, and as always we thank you for your support!

We sincerely apologize to our Spanish fans for unavoidably having to cancel tonight’s show.

8. Our reply was that the statement was useless, because it didn’t give any explanation as to why the show had been cancelled. The audience deserves respect and has a right to know. We insisted they should send us a statement with the real reason for the cancellation and the justification for it and that we were not going to post their statement because we felt it was disrespectful to the fans, as it seemed that they cancelled the show simply because they didn’t feel like coming to Cartagena. But they kept insisting on posting their nonsensical press release, without giving any further explanation.

9. We warned them that, if they had cancelled the show with no justified cause, they would have incurred in a serious breach of contract, thus damaging the fans, the organisation, etc.

10. At that moment, they threatened us with denigrating the organisation, with absurd and unfounded complaints about organisational problems in order to be able to perform their show. An absolute lie, as their equipment was almost ready for the soundcheck. In fact, 42 out of the 43 scheduled bands performed without any problems at all. And exactly the only ones claiming problems are Whitesnake, who apparently did not even travel to Cartagena and flew straight from Nantes to Milan? And exactly when we mention their breach of contract, they then threaten to spread these absurd complaints, about which they had said absolutely nothing until then?

11. At the time of writing this statement, we still don’t know why Whitesnake didn’t travel to Cartagena to play, leaving all their Spanish fans stranded and trying to justify it with excuses, but not giving a justification.

It has been a fantastic first edition of the festival thanks to ALL OF YOU and all the bands involved, as well as to an incredible team of people behind the scenes who have worked very hard to offer the highest organisational level possible even for a first edition, considering everything that this entails. Do we have things to improve? Of course, we are already taking note of all your comments and for next year a lot of improvements will be made, no doubt about it. But we are absolutely disappointed and sad that the poor behaviour of a great band like Whitesnake, who have left us and YOU their fans stranded, have tarnished the image of the festival in such an unfair way.

The Whitesnake camp took exception to Rock Imperium Festival‘s description of events as the following message was posted on Whitesnake / David Coverdale‘s Facebook page on June 26, 2022:

“Now Hear This!!! “Tommy was under the weather, as we all can get, but is getting better: he never had, what was inaccurately described as “severe health problems” and can’t wait to get back out there to perform for the fans! “

The next day, the Whitesnake camp announced more bad news with a few more cancelled dates:

“Dear Whitesnake fans around the world:

We have been rocking our way across the globe on the first part of our Farewell Tour giving all we’ve got to you, the fans.

The rigors of the road are the same for all of us and we have been trying to keep everyone healthy and safe.

Unfortunately we have been hit recently with a couple of situations that we have been dealing with, the best we can..

First our beloved band leader Reb Beach went down temporarily and he missed a couple of shows while he mended (and is much better now, by the way).

Then the rock of our band, the Legendary Tommy Aldridge went down and we unfortunately were not able to play the Rock Imperium Festival in Cartagena this past Saturday (very regrettable and all apologies to our Spanish fans and friends).

Tommy was bad enough at the time to have missed the first show ever in his career – The GOOD news is that he is feeling better and is anxious to get back out there to perform for all of you.

Unfortunately I have now been hit hard as well. I started feeling a bit under the weather two days ago, and was just diagnosed with an infection of the sinus & trachea. The doctor recommends 5 days of no singing and bed rest.

Sadly, that means that we are not going to be able to do the upcoming shows in Milan, Vienna and a decision on Zagreb is about to be made.

I’m very sorry to all the fans who had planned to come see our Farewell Tour in each of those cities – it’s my intention to get better as soon as possible and be able to pick up with the remaining shows of the European Farewell Tour. You are all in our hearts!! 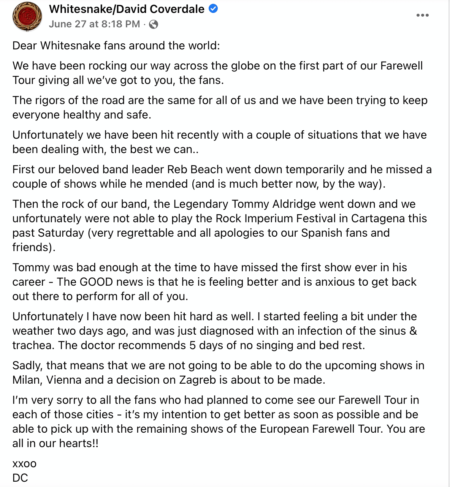 A further update came from the Whitesnake camp on June 28th:

“Update to all our Whitesnake fans:

As stated earlier, I am still under doctor’s orders of bed rest, and to not sing for 5 days as i recover from this sinus infection. That time frame includes the show in Zagreb this Saturday, July 2nd so we are unfortunately going to have to cancel the Zagreb show as well.

This is obviously very sad for us, especially our band members that were getting to perform before hometown crowds; Michele Luppi, our Italian Stallion was looking forward to playing in Milan in front of his friends and family, and of course Dino Jelusic, the Pride of Croatia was going to be able to give his all, to his hometown of Zagreb.

We regret that this is necessary in our attempt to get healthy and be able to finish the rest of our tour. 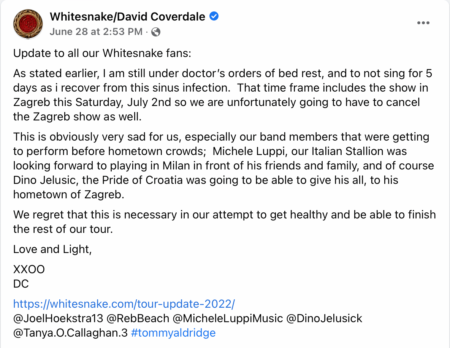