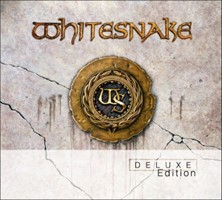 Whitesnake’s 1987 self-titled release is back…and better than ever. A deluxe edition of the successful album will be released on April 20th is the U.S. with bonus tracks and video footage. The deluxe edition of 1987 is available for purchase at Amazon.com.

British born vocalist extraordinaire David Coverdale paid his dues early on with superstar band Deep Purple before setting a new musical course with the group he formed & has led thro several incarnations since the late 70s. Though the band had released several platinum selling albums prior to this, the 1987 self-titled Whitesnake, none matched their new musically muscular approach, or the impact that this hit-driven, melodic-yet-heavy-rocking release attained.

Initially the album was given significant attention with the release of the video Still Of The Night, which was the longest promo video MTV ever played on heavy rotation at that time, & introduced the band to millions of unsuspecting viewers who until then had never heard of the British import.

The song, tho’ never released as a single, was a smash at rock radio. Sales then went thro the roof with the release of the energetic No. 1 single Here I Go Again followed by soulful ballad Is This Love, which reached No. 2, & fans of Whitesnake both old and especially new embraced the album with open arms as it went on to become a multi-million selling success in the U.S. alone.

The synchronicity of an album loaded with some great classic rock anthems that are as vital today as they were when the were first released, & arriving during an era fuelled by music videos & the monster promotional vehicle that MTV was at that time, proved an irresistible force that could not be ignored.

Joining the original album, which has been freshly digitally remastered, are four live stage performances of the memorable songs from this album, which were all Billboard chart hits.

This is a must for any discerning rock fan to have in his, or her collection.