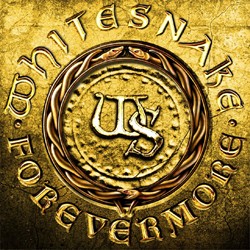 Whitesnake, the legendary rock’n’roll legacy founded and formed by renowned singer/songwriter David Coverdale, unleashes a brand new storming ‘Snake statement, “Forevermore” on Frontiers Records on March 25th in Europe and March 29th in North America. A sample of the track “Love Will Set You Free” can be heard at http://www.frontiers.it/m/uploads/audios/whitesnake_lovewillsetyoufree_sample.mp3.

Their 11th studio album, “Forevermore” was recorded, produced and mixed by Coverdale, guitarist Doug Aldrich and Michael McIntyre at Snakebyte Studios and Grumblenott Studios & Villas in Lake Tahoe, Nevada, with additional work at Casa Dala, Sherman Oaks, CA, and Whitesnake will take to the road for a full world tour in support of the release.

Formed in 1977, and steered by the legendary Coverdale, Whitesnake carry a rightful reputation as one of the world’s leading rock’n’roll bands. Coverdale’s blues and soul roots, combined with a feral sense of rock and roll, have consistently shaped the ‘Snake’s sound, and add to that Coverdale’s love and appreciation of impeccable musicianship and you have a failsafe recipe for success.

Their ascent to the very top of the rock’n’roll tree was confirmed with 1987’s self-titled mega-platinum album, which saw two top 10 hits, two number one singles with ‘Here I Go Again’ and ‘Is This Love’ and a virtual 24 hour domination of MTV around the world. Such triumphs were surely foretold when as a young man from Saltburn-By-Sea, Coverdale enthusiastically answered the call to be Deep Purple’s singer. Such bombast, bravado, talent and passion have thus helped establish Whitesnake as the perennial platinum favorite they have become.

With “Forevermore” Coverdale has reignited an explosively fruitful vein of creativity with guitarist and co-writer/producer Aldrich, Reb Beach (Winger, Alice Cooper) on guitar, Briian Tichy (Ozzy, Billy Idol, Foreigner) on drums and Michael Devin (Kenny Wayne Shepherd, Lynch Mob) on bass, and as with all Whitesnake’s albums, Coverdale aided so capably by Aldrich opens up his heart and soul to express emotions and empathy rarely heard these days in any musical genre.

More than simply their latest release, “Forevermore” represents Whitesnake’s no holds barred, most heartfelt, melodic and musically muscular excursion for many a year.

“Forevermore” will include the following songs:Steal Your Heart Away; All Out Of Luck; Love Will Set You Free; Easier Said Than Done; Tell Me How; I Need You (Shine A Light); One Of These Days; Love And Treat Me Right; Dogs In The Street; Fare Thee Well; Whipping Boy Blues; My Evil Ways; Forevermore.