Who owns the trademarks for Rough Cutt?

That is indeed the question for many Rough Cutt fans as there are now two Rough Cutt entities.

The first of the two Rough Cutt entities to appear was the one spearheaded by guitarist Chris Hager and drummer Dave Alford, who recruited lead vocalist Steven St. James, guitarist Darren Householder and bassist Jeff Buehner to round out the line-up. That group released a video for the single “Black Rose” on March 25, 2021.

The second of the two Rough Cutt entities made a dramatic entrance three days ago (on June 8, 2021) with the release of a new album titled Rough Cutt 3 via the record label DDR Music Group. That group features band founder Paul Shortino on lead vocals along with classic line-up members Matt Thorne on bass and Amir Derakh on guitar.

Shortino who spoke to Sleaze Roxx yesterday (interview to be posted in the near future) posted the following letter on his Facebook page shortly after the interview yesterday. The letter states: 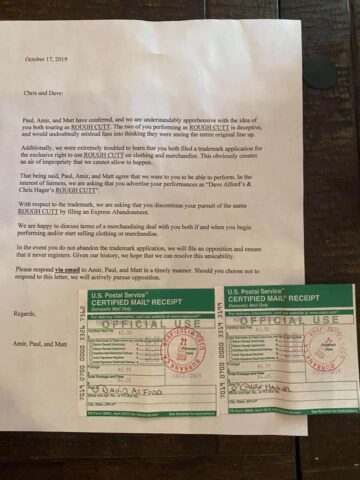 Paul, Amir, and Matt have conferred, and we are understandably apprehensive with the idea of you both touring as ROUGH CUTT. The two of you performing as ROUGH CUTT is deceptive, and would undoubtedly mislead fans into thinking they were seeing the entire original line up.

Additionally, we were extremely troubled to learn that you both filed a trademark application for the exclusive right to use ROUGH CUTT on clothing and merchandise. This obviously creates an air of impropriety that we cannot allow to happen.

That being said, Paul, Amir, and Matt agree that we want to you to be able to perform. In the interest of fairness we are asking that you advertise your performances as “Dave Alford‘s & Chris Hager‘s ROUGH CUTT“.

With respect to the trademark, we are asking that you discontinue your pursuit of the name ROUGH CUTT by filing an Express Abandonment.

We are happy to discuss terms of a merchandising deal with you both if and when you begin performing and/or start selling clothing or merchandise.

In the event you do not abandon the trademark application, we will file an opposition and ensure that it never registers. Given our history, we ho[e that we can resolve this amicability.

Please respond via email to Amir, Paul, and Matt in a timely manner. Should you choose not to respond to this letter, we will actively pursue opposition.

With that information, Pariah Burke, the host of The Hard, Heavy & Hair Show radio show and podcast, and occasional Sleaze Roxx correspondent, dug up the following information about trademarks pertaining to Rough Cutt:

“So, I just researched the trademark applications. An attorney acting on behalf of “Rough Cutt, LLC” did indeed file for a TM on “Rough Cutt,” the name, Aug 17 2019. You reported Alford and Hager out of Rough Riot on Aug 31, 2019.

Then, someone filed for opposition to the Trademark application on Dec 24, 2019, just like Paul‘s FB letter promised. The response to the opposition was apparently never answered by the Rough Cutt, LLC, so the application was officially marked as “abandoned, no use” Sept 21, 2020.

Then, on April 26, 2021, “Rough Cutt Music” with a different address than Chris‘s or Dave‘s, an address in Las Vegas where Shortino lives, filed a new trademark application for “Rough Cutt.” The specimens provided to prove inter-state use of the mark prior to seeking registration are those only associated with 1980s-Rough Cutt merchandise and an album.

Check out Burke‘s recent interview with Alford and Hager for The Hard, Heavy & Hair Show podcast via Sleaze Roxx or via the YouTube video below: