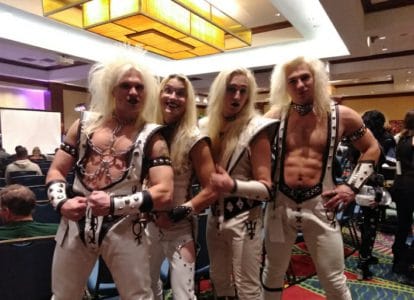 With respect to how he joined the band, Scotty V advised (with slight edit): “Well I joined Wicked around 5 years ago. I was first contacted by Danny Döll who invited me to try out for the lead guitar spot. I was very hungry to play at the time. I knew that these guys were the long lost brothers I was looking for, and I knew I was the missing piece they needed. So I made my way to their rehearsal place almost two hours away from where I lived at the time and showed them what I was all about. It was imidiatly clear after a little bit of jamming and song writing that we had great chemistry.”

With respect to how he would describe Wicked‘s sound, Scotty V stated (with slight edits): “Wicked’s sound is somthing new and refreshing with strong rock n roll roots. Just like with any artists you hear influences from other things, but overall Wicked is somthing different and bleeds emotion and passion. We are four brothers that are incredably close, we aren’t just random guys that can play very well and decided to play together. The sound that comes out when we play together sends a chill down my spine and gives me a rush that nothing else could ever replicate.”

In regard to whether there are any plans for a debut full-length album, Scotty V advised (with slight edit): “We do have plans for a full length debut album! We are currently working with LA producer Mark Paladino (formally managed by KISS manager Bill Aucoin)! We have over 70 songs demoed to sift through and pick from. It’s a long process to do it right but we plan to deliver the very best rock album Wicked rock n roll style.”

You can read the rest of the interview with Scotty V at The New Wave of Hair Metal‘s Facebook page.