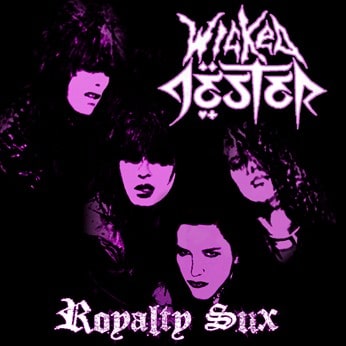 The Sunset Strip has delivered us yet another treasure! Demon Doll Records and Hollywood bad boys Wicked Jester have teamed up to maximize your glam and sleaze pleasure threshold with the release of the bands first 9 song CD — ‘Royalty Sux’.

Your senses are about to overdose on an L.A. Guns and Lynch Mob cocktail. Shane and the boys have gone back in the studio and re-cut the entire record from start to finish, and this baby is loaded with a whole lot of glitter and whole lot of gutter.

Open up a Rock City News from the glory days and you’ll see the boys poised to settle in as Sunset Strip royalty, their stage show was ferocious and their songs downright epic! From the ass kicking “Shot To The Head” and “Get Back M.F.” to the radio ready “In Need Of Love” and “Champagne In The Rain”, this album delivers on every track from start to finish.

With the hooks, looks, woman and wine… who needs royalty when the Wicked Jester ruled the town?

With so many ways to be ‘wicked’ we have decided to open the record at an introductory price of $12.99 for the first 2 weeks of release, so get your copies early and often as this offer will not last long. This album is silver pressed, officially licensed from the band and exclusively available at http://demondollrecords.com/wicked_jester/wicked_jester_royalty_sux.