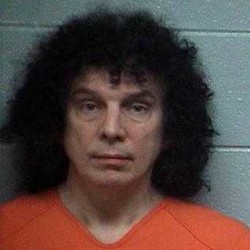 A former guitarist of Wicked Lester, the rock and roll band that preceded KISS, was arrested in Beaufort County on Friday, accused of uploading child pornography, reports the Charlotte Observer.

Stephen Coronel, 63, of Bluffton, South Carolina, was charged with five counts of sexual exploitation of a minor following a search of his Plantation Pointe apartment, Sgt. Robin McIntosh of the Beaufort County Sheriff’s Office said.

The investigation began when the U.S. Department of Justice’s Internet Crimes Against Children Task Force determined child pornography had been uploaded from a home in Bluffton, McIntosh said. The task force and Sheriff’s Office tracked the material to Coronel’s home.

Coronel was the lead guitarist in Wicked Lester in the early ’70s, featuring Paul Stanley and childhood friend Gene Simmons who would later change the name of the band and become successful as KISS. Coronel would be fired from the group prior to the recording of their never released debut, but some of his co-writes with Simmons would surface on KISS albums in the form of “Goin’ Blind” (from 1974’s ‘Hotter Than Hell’) and “She” (from 1975’s ‘Dressed To Kill’).