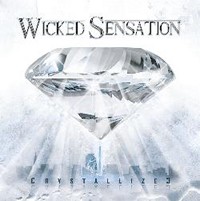 In 2001, WICKED SENSATION for the first time stepped into the spotlight of the international hard rock scene with their highly praised debut album “REFLECTED”. Shortly after, WICKED SENSATION was featured in the press as “The Newcomer” of the year, and compared – but not least because of the charismatic voice of Robert Soeterboek – with well known bands like WHITESNAKE. Their debut “REFLECTED” was named album of the month in the ROCK IT! magazine and brought the band exclusive, above average reviews and ratings worldwide. While touring Europe accompanied by the English band Dare, WICKED SENSATION was able to demonstrate impressively their qualities as well as their outstanding live performance.

Numerous shows and festivals followed the tour with bands like Saxon, Saga, Nazareth, Roger Chapman, M3 classic Whitesnake, Axxis, Vanden Plas, and many others. In 2004 WICKED SENSATION released the follow-up album “EXCEPTIONAL” and Fernando Garcia (ex-Victory) took over the vocals. Once again, WICKED SENSATION received outstanding reviews internationally and again was named “Album of the Month” in the Spanish edition of ROCK HARD magazine. After several gigs with this formation the band called it quits in 2006 due to musical differences.

Michael Klein (founder, songwriter and guitarist of the band) never really wanted to close the topic WICKED SENSATION. So in summer 2009, Michael and original singer Robert Soeterboek got back together to arrange a new collaboration. Also joined by bassist and producer Dennis Ward (PINK CREAM 69) and drummer Dirk Bruinenberg (ex-ELEGY/BOB CATLEY) the top-class album titled “CRYSTALLIZED” was recorded.

“CRYSTALLIZED” includes all the typical trademarks, which have made WICKED SENSATION well known on their debut album, and flawlessly connects with the successes of the early days.Marked by the typical, strong production of Dennis Ward (PINK CREAM 69), songs ranging from the driving and catchy melodic rock tune to bluesy and soulful inflected songs are featured, all which characterize the typical sound of WICKED SENSATION. Again, singer Robert Soeterboek demonstrates the utmost impressive qualities of his vocal performance. Furthermore, “CRYSTALLIZED” also includes a guest appearance by no other than HELLOWEEN’s singer Andi Deris. With the high potential hit record “MY TURN TO FLY”, Deris together with Robert gives this song a “certain something” to let this one for sure become a catchy hit track. Even Dutch guitarist Arjen Lucassen (AYREON, STAR ONE) involved himself to give the album a real rock classic with “GIMME THE NIGHT”, as well as keyboarder Eric Ragno (GRAHAM BONNET) contributed keys on “GIVE IT UP”.

“CRYSTALLIZED” impresses with a variety of first class songs, which definitely have a convincing impact. Due to the distinctive guitar playing and songwriting of Michael Klein together as a team with Robert Soeterboek and Dennis Ward, this new WICKED SENSATION album will most certainly be the surprise of 2010!