“Wicked lives for rock n’ roll. The kind that lights a fire in your blood and puts that crazy in your eyes! And the proof is certainly within their new album, ‘The Last American Rock Band,’ which will be available in various formats (CD, vinyl and all digital & streaming services) on March 11, 2022. And the same day, the band will be performing an album release party at Photo City Music Hall in Rochester, New York. New merch and music will be available at the show.

Also, a teaser for the upcoming video “Hot Stage Lights” can be viewed:

Band members Danny, Chad Michael, Scotty V and Gunnar make up the rock n’ roll brotherhood that has become known as Wicked, hailing from Rochester, NY. ‘The Last American Rock Band’ is a celebration of the songs, stages, and fans that have made the band who they are over the years and brings a melodic hard rock mix of fan favorites, as well as a couple never heard 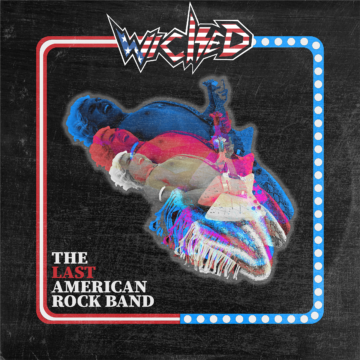 before tracks, all produced by 6x Grammy-winning producer Ignacio Molino.

The album is the perfect representation of what the band has become known for over the years; a high energy, theatrical hard rock act, built on delivering an over-the-top live show with bombastic songs, and is high energy rock n’ roll built on the classics and inspired by the now.

“Making this album became a drinking game between who’s guitar had to be tuned the most times.” –Scotty V

“It was such a rush to finally get these tracks recorded and released with just the right production, bringing a whole new life to them for our fans.” –Gunnar

“I’m so excited to finally get this music to our fans. We’re living with our hearts on our sleeves and not looking back. This is only the beginning of honest to god, Wicked rock n’ roll!” –Chad Michael

“‘The Last American Rock Band’ is the perfect celebration of the band’s past and an exciting turning point for a new era of Wicked rock n roll to follow!” –Danny

Let’s raise a glass to the past with ‘The Last American Rock Band’. This one’s for the OG fans! Get ready, Wicked has only just begun!