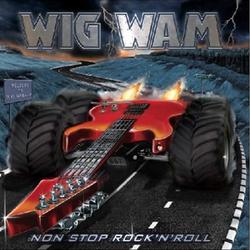 Frontiers Records is excited to announce the release of WIG WAM’s new album “Non Stop Rock and Roll” on January 29th in Europe (excluding Norway) and February 9th in the USA.

The Norwegian Glam Kings are finally back in the ring with their brand new album. Aptly titled “Non Stop Rock And Roll”, this new record shows all the elements that made up the monster reputation these guys are internationally known for: driving energy, unstoppable force and neverending fun !

“Non Stop Rock And Roll” is easily the band’s most complete album to date that offers 12 fresh sounding, breathtaking songs, that wears the guitars on it’s sleeves, still showing a more mature and less cheesy band.

The catchy hooklines and melodic Hard Rock anthems that WIG WAM are known for are still very much present, yet the feel of this album brings you right in front of the Marshall amps. Blowing your speakers with full blown Rock’n Roll this album is a Hard Rocking musical journey from the catchy opening track and first single “Do Ya Wanna Taste It” to the electrifying riff of “Walls Come Down”, from the Glam Rock happy going sing along anthem “C’mon Everybody” to the fast and furious title track. And hey, the boys also have the ability to set your girlfriend’s heart on fire with a couple of unique ballads for the ride. With three gifted songwriters – singer Glam, guitarist Teeny, bassist Flash – in the camp plus the rhythm machine drummer Sporty, “Non Stop Rock And Roll” shines, tweaks and pounds a full blooded rock’n roll album ought to.

WIG WAM is finally ready to take you to the ultimate rock trip, and bring their wild live performances on the road in 2010.