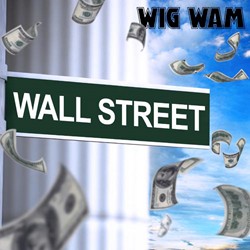 Wig Wam is due to release the new single “Wall Street” on February 24th through Frontiers Records. “Wall Street” is taken from the forthcoming album with the same title, which will be released this spring.

“Wall Street” is the story of a musician who trade his guitar for a company brand to make his fortune in the stock market. It’s got the recipe of a great Wig Wam “Smash Hit” and is everything you expect from these guys.

Wig Wam was founded late 2000 after getting back to their personal musical roots as a jam band. Covering songs that inspired them to pick up instruments in the first place gave birth to Wig Wam, and on February 24th 2001 they kickstarted their now 9 year old Wig Wamtical journey. After two years on the road the band’s followers were increasing rapidly in their home country of Norway, but they were yet to be accepted by the music business. Taking notice of the feedback received from their live audience the band recorded their first album “667… The Neighbour of The Beast” at their own expense and shocked their countrymen by joining the Norwegian Eurovision song contest final to promote themselves. Wig Wam suddenly became a household name in Norway after turning the contest into a rock concert rather than a song-contest. But it wasn’t until 2005 when Wig Wam would enjoy their major breakthrough, by being invited back to the Eurovision song contest Wig Wam pulled it off big time.

“In My Dreams” was released two days after their victory and went straight to #1 on the national charts, where it stayed for over 21 weeks and sold platinum. Their new edition of “667..”, now titled ‘Hard To Be A Rock’N Roller’, stayed on the charts for 19 weeks and also went platinum. Wig Wam was suddenly making headlines by introducing hard rock to the international Eurovision song contest final were they made #9 a victory for a the whole genre.

‘Hard To Be A Rock’N Roller’ and the smash hit “In My Dreams” put Wig Wam on the map and led the band to a victorious tour that counted 187 concerts in just a year. The tour took Wig Wam through Norway, Sweden, Germany, Iceland and England.

Midway through the tour Wig Wam also recorded a one-off show with an symphonic orchestra for their debut DVD ‘Rock’n Roll Revolution’ which was released in November of 2005. The DVD soon went Gold and topped the Norwegian DVD charts.

In 2006 Wig Wam went straight from the road to the studio and recorded their follow up, ‘Wig Wamania’. The album was released on February 17th and the band immediately found themselves back on the road on their Wig Wamania Tour which took the band to Japan for the first time. Wig Wam’s tourdates in the land of the rising sun were recorded and ended up being released in 2007 on both the double CD ‘Live In Tokyo’ and the DVD ‘Made In Japan’. Later that year Wig Wam returned to Japan as one of the major acts on the Loud Park Festival bill which was later broadcasted on MTV Japan.

Wig Wam took a break through 2008 which gave the band members a chance to pursue other individual activities. Flash worked with his former band Artch, Teeny recorded his forthcoming Dracula concept album ‘Swing of Death’ as well as returning to his former band Dream Police and Glam toured with his Queen show The Show Must Go On and released his second album ‘GLAMunition’.

In 2009 the band got together again to start working on their third studio album ‘Non Stop Rock’N Roll’. They spent most of the summer in Teeny’s studio The Rock Ranch to record the 11 tracks that became the first Wig Wam album to be released simultaneously in Europe and Japan. The album was a huge success for the band, going Gold Award in Norway, and also took them all around the world, including tours in the USA, Japan and the rest of Europe.

“Wall Street” is the title of Wig Wam’s new single, and also the name of the forthcoming album. Fans will not be disappointed as Wig Wam still present them with classic and catchy choruses. It’s melodic hard rock — blowing your speakers with full blown Rock’n roll anthems.