WildFest‘s fourth edition will be taking place in Geraardsbergen, Belgium on May 25, 2019 and will feature eight bands consisting of Crazy Lixx, Shiraz Lane, Snakebite, Midnite City, The New Roses, Art Nation, WildHeart and Raider. You can purchase tickets for WildFest 2019 via the festival’s website. 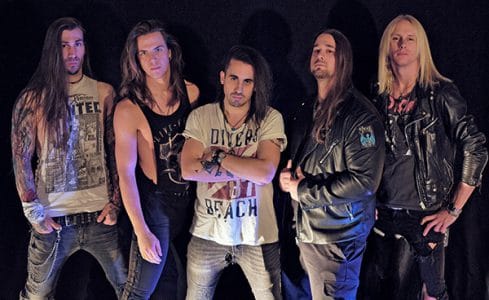 Swedish sleaze rockers Crazy Lixx are no strangers to Sleaze Roxx given that their studio albums have consistently finished among the top albums of the year for both Sleaze Roxx and its readers. Crazy Lixx‘s last studio album Ruff Justice was the group’s fifth record to land in the Sleaze Roxx readers’  year-end top six with a #5 finish in 2017 after Loud Minority (#3 in 2007), New Religion (#6 in 2010), Riot Avenue (#4 in 2012) and Crazy Lixx (#4 in 2014). No other band has achieved so much consistency among Sleaze Roxx readers when it comes to its year end lists.

Sleaze Roxx stated the following in its review of Ruff Justice: “Ruff Justice continues in the same vein, but with different capabilities.  New Religion and Riot Avenue were solid records, to be sure. Ruff Justice differentiates itself by going even more ’80s based, using harmonic vocals and melodic guitar lines throughout similar to Danger Danger, or maybe Mr. Big.”

Finnish hard rockers Shiraz Lane are also no strangers to Sleaze Roxx given that the band has received coverage dating back to its second EP Lights Out in 2012, which funnily enough has all but been “erased” from the group’s history. In 2015, Shiraz 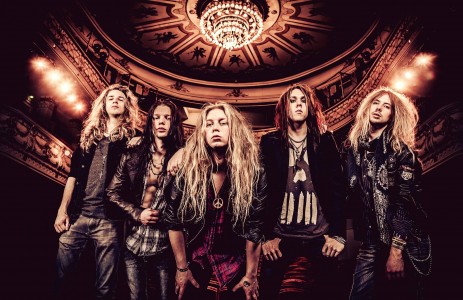 Lane signed with Frontiers Music Srl and they have since released a number of albums consisting of the Be The Slave Or Be The Change EP (touted as the band’s “debut” EP on its Facebook page), For Crying Out Loud in 2016 and Carnival Days in 2018.

Sleaze Roxx stated the following in its review of Carnival Days: “After a few songs, I’m getting the feeling that Shiraz Lane are enjoying combining different influences and styles in order to create their own unique sound. Whether it’s Skid Row, The Offspring, Guns N’ Roses or whatever, they rock. The initial guitars on “Tidal Wave” grated on my nerves, but hell, it’s a good tune. Now, being no fan of hard rock bands going soft, “Gotta Be Real” is not bad. It’s a similar feel to the old L.A. Guns‘ “It’s Over Now” track, but different, including a bit of saxophone and a heavier interlude.” 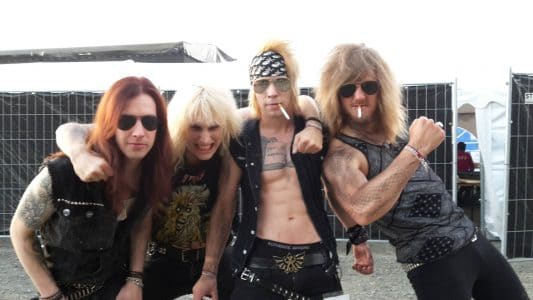 German hard rockers Snakebite are yet another band that has received ample coverage on Sleaze Roxx over the years. Snakebite‘s debut full-length album Princess Of Pain finished at #4 on the Sleaze Roxx’s Top Ten Albums of 2015 and their follow up album Rise Of The Snake was another good one.

Sleaze Roxx stated the following in its review of Rise Of The Snake: “Snakebite have done it again mastering the art of melodic rock with an edge. I lump the band in the same breath as such melodic rock (with an edge) heavyweights as Eclipse, H.E.A.T (especially with Tearing Down The Walls) and Kissin’ Dynamite (the latter based mostly on their latest album Ecstasy). I’d love to be able to catch a live show from these guys and hope that Rise Of The Snake is the album that catapults Snakebite to the next level such as an Eclipse or a H.E.A.T.”

Midnite City‘s “Biography” on their Facebook page states in part (with slight edits): “Following on from their explosive self-titled debut album last year, Midnite City return all guns blazing on 19th of October 2018 with their sophomore release ‘There 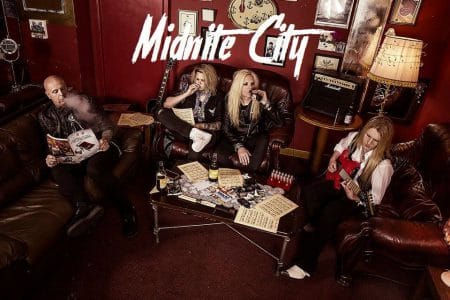 As with the first album, the winning formula has remained – all songs have been written by Rob Wylde, whilst Pete Newdeck has once again taken control of production, engineering and mixing duties. With ‘There Goes The Neighbourhood’, the band has literally stepped everything up several notches to unbridled, head splitting proportions. The guitars are big, the drums are huge, there are walls and walls of harmonies and more synths than you’d find this side of a classic Bon Jovi album. In a nutshell, this album has everything but the kitchen sink!”

Other bands that will be playing WildFest in 2019 include Germany’s The New Roses, Sweden’s Art Nation, Belgium’s own WildHeart and Raider.