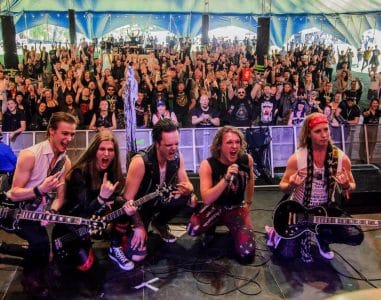 With respect to why Wildnite have decided to release singles occasionally supported by videos ahead of an actual album, Magic Mick stated: “We chose that route, because we think it’s a nice way to promote the upcoming album and to make people interested and aware that something is coming up. It worked well for our first single “Tears N’ Fire” so we figured that it would be a good idea to continue like that until the album is released. The reason we are releasing music videos is because it makes the songs easier to promote, and of course it makes it more exciting for the listener. Pretty basic way to prepare an album release, if you look at the big boys in the industry.” Jizz added: “We also wish to adapt to the music industry of today’s music. That’s why we have released four singles, instead of one or two, like they used to do in the ’80s. That’s also why we try keep the songs short and interesting.”

In terms of what’s the idea behind the video for “Days Of No Trust” and what’s the message behind the song, Eric Rotz advised: “There’s really no spesific meaning behind the video, but we thought the whole “black & white” theme suited the vibes of the song.” Jizz added: “When it comes to the message of the song, I’m not that keen on telling the exact meaning behind it. It’s up to the listener. I’ve already heard people say it’s about love, third world problems and even depression. The best answer I can give you is to say, listen to it and experience the song for yourself.”

Wildnite‘s “Days Of No Trust” video: