Wildstreet featuring band founder and frontman Eric Jayk have announced some dates for their Kings of World Tour in June throughout the United States of America. 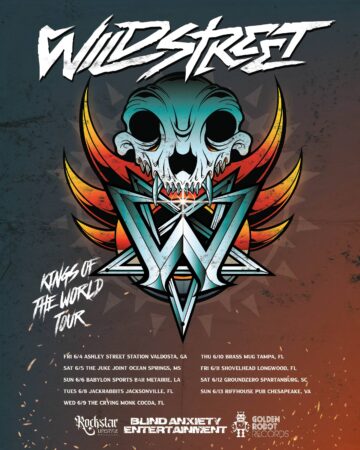 Sleaze Roxx stated the following in its review of Wildstreet‘s performance at the M-Pre Party at Sonoma’s Bar & Grill in Columbia, Maryland, USA back on May 3, 2018: “The surprise of the night was definitely Wildstreet. I wasn’t familiar with the group’s songs aside from the ones that I had posted in various Sleaze Roxx articles in the last few years including the new single “Raise Hell.” Wildstreet frontman Eric Jayk definitely looked like a rock star. He had a huge set of died blond and blue hair. He was quite thin but muscled and reminded me of a shorter Michael Monroe. Jayk even addressed the M-Pre Party crowd by stating something to the like, “Bet that you’ve never seen people like us before?” Joining Jayk on stage was a brand new cast from the ones that had appeared on the group’s debut self-titled album.