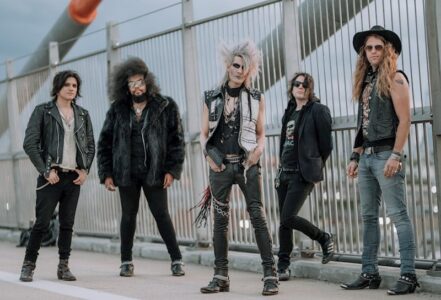 “Wildstreet‘s latest single ‘Won’t Be Apart (feat. Todd Long)’ began as a voice memo of a melodic idea, sent to Eric Jayk (Wildstreet) from Ghost of Sunset‘s Todd Long. After a few short weeks, the song was recorded and Jon Wyman (The Pretty Reckless) had been recruited to mix. This isn’t the first time Jayk and Long have combined forces, with previous collaborations including Ghost of Sunset‘s ‘All I Wanna Do is Rock’and ‘Look Me Up (If You Come Down)’, both released in 2021 via Golden Robot Records.

‘Won’t Be Apart (feat. Todd Long)’ is out now on all digital platforms. The track’s highlights include a pedal steel guitar solo, strings and lush vocal harmonies reminiscent of 90s R&B.

Wildstreet’s massive album ‘III’ has racked up over 1.8 million streams on Spotify since its release in June 2021. After spending most of the year on tour in the US (100+ shows including Rockfest), the band also toured Europe, bringing their music to fans in Switzerland and France for the first time ever. They concluded the year by releasing their cover of ‘Mrs. Sleazy’, originally recorded by The 69 Eyes back in the 90s. Wildstreet had a huge 2021 and are following suit in 2022 with their third studio album already in the works.

Wildstreet have just embarked on their US tour and are set to appear at Rockfest later this year, with multiple shows in Mexico, Colombia, the UK and Europe coming up. And to celebrate the 1-year anniversary of their latest album ‘III‘, the band will be playing the legendary Whisky A-GoGo in Hollywood on June 25, 2022. Tickets are available here.