New York rockers Wildstreet have released a lyric video for their single “Raise Hell” which was originally released on December 15, 2017. 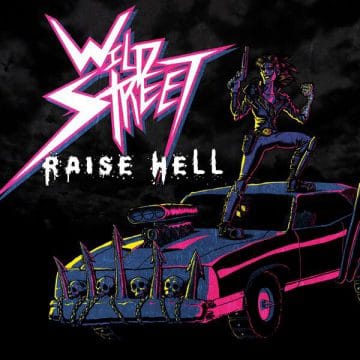 “Wildstreet began in 2006. Over the course of the next 7 years, the band released two EPs & two music videos which have received well-over 3,000,000 youtube views. Wildstreet’s songs have appeared on National/International TV networks including: MTV, VH1, Oxygen, TBS and in a THQ Video game. The band toured non-stop from 2009-2013, and appeared at the largest US music festivals: including SXSW, M3 rock festival, and headlined the side stage at Rocklahoma for 5 years straight.

The band was also their region’s winner in the Best Buy/Ernie Ball Battle of the Bands for Rockstar Energy’s Uproar Festival, sharing the bill with Avenged Sevenfold, and Three Days Grace. They opened for a number of well-known bands including The Bouncing Souls, Twisted Sister, Michael Monroe, Crashdiet, Kix, LA Guns.

In 2017, Wildstreet has performed select US dates, returned to Rocklahoma to headline the sidestage for the 6th time. They are currently working on their long-awaited new full-length release, due out in 2018.”