Wildstreet (USA), L.A. Cobra (South Africa) and Strÿkenine (Sweden) recently joined forces to do a tour of Europe consisting of number of tour stops in Belgium, Germany, the Netherlands and the UK from March 7 to 16, 2019. The bands had some very challenging and difficult times during the tour including visa troubles getting into the UK (forcing them to cancel a

number of shows) and their tour manager allegedly taking their tour van and leaving them stranded.

About a month an a half later, Jayk has felt compelled to clarify that Wildstreet had a blast during their recent European tour despite the various issues that the band encountered.

“After playing the M-Pre Party two nights ago [at Sonoma’s Bar & Grill in Columbia, Maryland, USA on May 2, 2019], I feel like I need to clarify myself to our fans regarding our experience on tour in March. I accept partial accountability due to my post-tour press release focusing on our tour manager.

I would like to set the story straight now, so our fans, all over the world know the truth. Wildstreet European Tour 2019 was not a disaster by any means. We played great shows, met a ton of people and witnessed for the first time our real fan reach. Furthermore, we returned with our merchandise nearly sold out, and with a ton of new listeners on streaming services such as Spotify, Deezer, etc and music sales. We’re hoping this momentum will continue with our new album, Wildstreet III on its way.

Sidenote: Our first single and official music video “Tennessee Cocaine” will be available digitally mid-summer. With the exception of last year’s single ‘Raise Hell,” we haven’t released any new music since 2012. 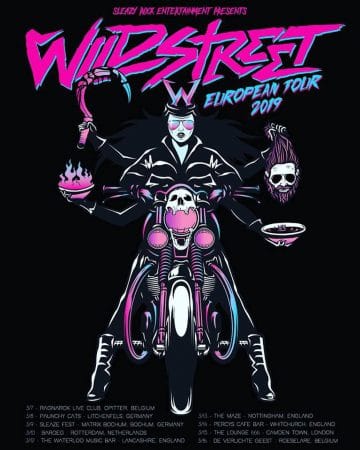 For 13 years, Wildstreet (in all our various line-ups) have been pounding the pavement and doing whatever it takes to give fans 110% and make great music….

One of my greatest Wildstreet memory is from Rocklahoma 2009. We played the opening set at 12pm on Day One, to a scattered crowd in over 100 degree weather. Shortly after the show, our guitarist was hospitalized. This was our first tour and the five of us were stuffed inside a beat up / graffiti clad 15 passenger dodge van with our backline and luggage and no air conditioning in June/July. When we got to Rocklahoma, we’d already been touring for over two weeks, stressed, exhausted. Our guitarist was well enough by Sunday night to play our closing set of the festival. Imagine, the awe and surprise of coming onstage to a densely packed tent spilling into the field to a crowd who knew EVERY LYRIC to EVERY song (“Midnight Gypsy” not included ?). To put it mildly, this made a lasting impression. It changed my life really.

Going back to Europe, with all of this known, can you imagine the feeling of rocking at Sleaze Fest Germany 2019 as co-headliner with Crashdïet, one of the hands down best sleaze rock bands, to a packed venue full of rock fans of various ages and from all over the world?  To take it one step farther, to be in a different continent and to see the crowd of people who had never seen us before from all over Europe singing along to our songs… It’s mind blowing.

Our music is about bringing the party to people, whether on record or at a show. It’s a universal invitation. If people are listening and rocking at our shows, we have reason to keep the party alive!

Now, let me say that Sleaze Fest, wasn’t the only high point… EVERY single show was great. There were REAL fans, peeps who came to see us and our tour mates’ sets. The last thing I need to say is this: Thank you to everyone who continues to supports us and independent / touring rock bands. Without you, the party would end.”