Will former Black N’ Blue guitarist Shawn Sonnenschein be the next Autograph guitarist?

That is indeed a valid question. A couple of days ago, former Black N’ Blue guitarist Shawn Sonnenschein hinted on Facebook that he had a big announcement to make but was apparently instructed to keep it under wraps for the time being. Meanwhile, Autograph have a vacant lead guitarist position to fill after tonight’s show in Springfield, Illinois, USA and before their next round of shows starting in Woodstock, Virginia, USA on August 31, 2019. 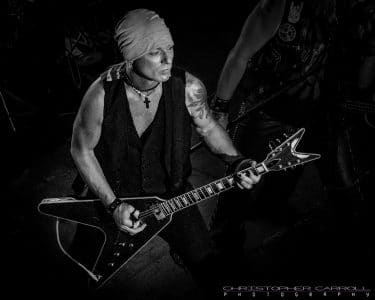 The following message was posted on Sonnenschein‘s Facebook page back on August 6, 2019 (which prompted a response from bassist Randy Rand and his wife, frontman Simon Daniels and drummer Marc Wieland):

“I wish I could say but I can’t yet, I want to show you but even though it’s been some time I have to wait.

I am feeling very excited about things and the future. Stay tuned !

“I wanna wish my brothers in Autograph a beautiful future! Randy Steve Simon and Marc!

I love all you guys and you have my full support!

I’ve always enjoyed hanging with you on the monsters of rock cruises m3 and everywhere else we got a chance to catch up and will always consider you family!! God bless you all my brothers!! ❤️❤️

Autograph are scheduled to play their last show (at the Illinois State Fair in Sprinfield, Illinois, USA) tonight with long-time lead guitarist Steve Lynch who announced about two weeks ago that he was leaving the band after 35 years to pursue a new band with his fiancé.

Autograph‘s lone remaining original member Randy Rand then announced shortly after that the group would be forging ahead without Lynch.

Sonnenschein played lead guitar in Black N’ Blue from 2003 to 2017 before being let go due (perhaps in part) to some behaviour (and/or his girlfriend’s behaviour) that his other bandmates apparently did not appreciate on the Monsters of Rock Cruise West that took place from October 1 to 5, 2016. In April 2017, former Vicious Rumors guitarist Bobby Capka was announced as Sonnenschein‘s replacement in Black N’Blue. In July 2017, Sonnenschein publicly declared that he was looking for a new gig.