It’s been less than three weeks since guitar legend Eddie Van Halen passed away but it appears that there is the possibility that Van Halen might continue without the legendary guitarist. 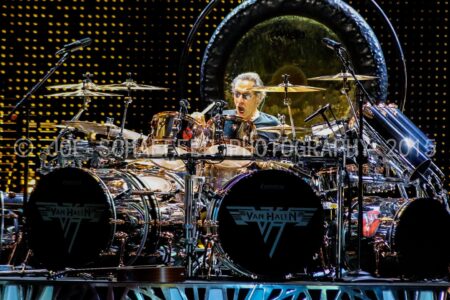 Sleaze Roxx does not have much information in this regard and cannot verify whether the information is true or not at this time.

That being said, the line-up that the Van Halen camp is rumoured to be considering is:

Reportedly, Eddie Van Halen gave his blessing in that regard to his brother Alex and son Wolfgang before passing away on October 6, 2020.

In an interview with Mark & Neanderpaul of the 100.7 KSLX radio station, Hagar revealed that he had actually reconnected with Eddie Van Halen prior to his death as he stated (as transcribed by Blabbermouth):

“A mutual friend of ours, George Lopez, who’s a comedian, called me and said, ‘Sam, you’ve gotta call Ed. He’s not doing good. And he loves you. You guys have to do something.’ George was looking to try to put the band back together and all that. So I said, ‘Oh, man. Are you kidding me? I went through his brother. I tried to go through everybody. Tell Eddie I hope he’s doing well. I’d love to speak with him, come and see him, whatever.’ So all of a sudden, George says, ‘Here’s his phone number. Call him.’ I picked up the phone, and we were texting and talking almost weekly — I would say, honestly, weekly since the beginning of the year. And [it was] nothing but a love fest. [He was] talking about how great Wolfie [Eddie‘s son Wolfgang Van Halen] is doing with his new record. He sent me some music long before it came out.”