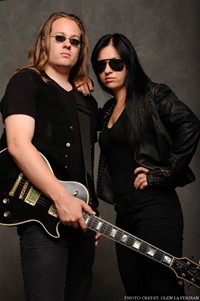 Los Angeles based hard rock artists Will Wallner (Guitarist) and Vivien Vain (Vocalist) announce completion of their debut album featuring an all-star line up of guest musicians. The duo are currently in the process of negotiations for the release of their debut album.

The project began when Wallner/Vain had a chance meeting with Carmine Appice and Vinny Appice at the Rainbow Bar & Grill on the Sunset Strip in 2010. Since then the album has evolved featuring several other session musicians. Their debut album consists of nine original songs and features the following guest musicians: Carmine Appice, Vinny Appice, Brian Tichy, Rudy Sarzo, Jimmy Bain, Tony Franklin, Derek Sherinian and Tony Carey. They album was mixed by Gary Tole and mastered by Graham Goldman at Masterdisk.

The album artwork will feature Wallner/Vain photographed by legendary photographer Glen La Ferman. Wallner/Vain are currently rehearsing in Los Angeles for up and coming live dates to coincide with their album release. They have also partnered with Los Angeles based PR company ‘Metal Assault’ to promote the release. More release details to follow.

For more information go to www.wallnervain.com