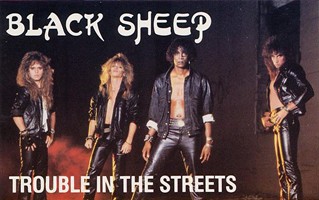 Willie Basse Auctioning Ownership To ‘Trouble In The Streets’ For Charity

Black Sheep’s debut album ‘Trouble In The Streets’ turns 25 years old In November, to celebrate this milestone of ‘Classic Metal’ band founder Willie Basse will be auctioning part OWNERSHIP of the album’s sales with the proceeds going to charity.

Willie Basse states, “I’m holding an ONLINE AUCTION called “Rock For Recovery” to give 15% ownership of album sales to the HIGHEST BIDDER and proceeds benefit Charity!

BLACK SHEEP “Trouble In The Streets” features PAUL GILBERT (Racer-X / Mr Big) on guitars. The album was never issued on CD and seems to be a much sought after collector’s item fetching as high as $57.50 for unopened vinyl on sites like eBay. I will remix and re-master it next month and This Special Limited Edition will include a previously unreleased track.