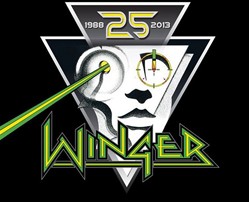 This August will mark the 25th anniversary of Winger’s self-titled debut album. To commemorate this milestone the band will perform and record the first Winger album live in its entirety. Winger are also hard at work in the studio recording the follow-up to 2009’s ‘Karma’, an album that was named one of the year’s best by Sleaze Roxx readers.

This full reunion concert will take place on August 30th at The San Felipe Casino in Algodones, New Mexico with special guests Warrant and Head East. In addition to the current line-up of Kip Winger, Reb Beach, Rod Morgenstein and John Roth, the band will also be joined by original keyboardist Paul Taylor for this show.

A limited amount of VIP Meet & Greet passes and full line of all new commemorative merchandise are available at tinmanmerchandising.com/Winger.

Winger is an American hard rock band from New York City. Their debut album, ‘Winger’, came out on Atlantic Records in 1988 and achieved platinum status in the United States and gold in Japan and Canada. It spawned such hits as “Seventeen” and “Headed for a Heartbreak.” In 1990, Winger was nominated for an American Music Award for “Best New Heavy Metal Band.” Their follow-up album, ‘In The Heart Of The Young’, was released in 1990 and just like their first album, reached platinum. Hits off this album includeD “Can’t Get Enuff,” “Miles Away” and “Easy Come Easy Go.”

As with many other bands of this time, grunge took over and Winger went their separate ways in 1994. They reunited again in 2001 and completed several very successful tours. In 2006, they recorded their first studio album in over 13 years, ‘IV’. In 2009, Winger released their 5th studio album ‘Karma’, which was hailed as their best studio album released.

Winger took a break in 2011 while guitarist Reb Beach toured with Whitesnake, however, Kip Winger continued touring as a performing solo acoustic performer. He also stays busy writing and scoring music for many different movie and Broadway projects and appeared on Rock N Roll Fantasy Camp. Now in 2013, Winger is back and will commemorate the 25th anniversary of the self titled Winger album, by recording a brand new CD with a future tour to follow.