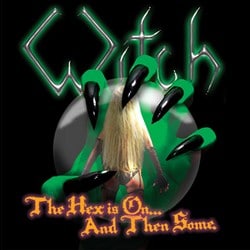 Witch Release ‘The Hex is On… And Then Some’

Witch’s new CD ‘The Hex Is On… And Then Some’, released through FnA Records, features the entire heavy driving ‘Hex Is On’ EP and THE ‘Nobody Sleeps’ 12″ single as well as various other anthem type recordings from Witch in the ’80s. The album is available for purchase at www.fnarecords.net.

Punky Peru and Peter Wabitt’s final recordings together were in 1997 and are included on the CD as well. These recordings were produced by Heart’s Howard Lease and features Dio’s Rowan Robertson on guitar and bassist Phil Chen, who has played with Rod Stewart, Bob Marley and Eric Clapton to name a few. There are also guest performances by former Guns N’ Roses guitarist Slash, Steve Stevens of Billy Idol fan, Keith Emerson and W.A.S.P.’s madman Chris Holmes. These recordings are a must for metal enthusiasts, especially from the 80’s! Crank it up and look out — who knows, Witch might be coming to a town near you.

Peter Wabitt and Punky Peru met in 1979 while playing in various bands at backyard parties. In 1980, playing in a band called Ampage, the two played Orange County and L.A. clubs and even toured Hawaii in 1981 before breaking up. In late 1982 Punky joined Don Costa in a bizarre power trio called Damian while Pete took up with Special Forces and recorded an EP. At this point Punky and Pete were living at the same house and knew they would soon be playing music in the same band. In early 1982 Ozzy Osbourne snatched up Don Costa and Pete and Punky formed Witch. While there have been several line-up changes throughout the years, the classic one has always been with original guitarist Ronny Too, bassist Jim Warmon, Peter on vocals and Punky on drums.

Witch came out strong, headlining clubs in Orange County and opening for bands in L.A. such as W.A.S.P., Loudness, Great White and others. Throughout the upcoming years Witch would support, or be supported, by bands like Poison, Slayer, Megadeth, L.A. Guns, Warrant, Lita Ford, Exciter, Warlock and many others.

Important Records distributed an EP on Witch’s own label OTT Records called ‘The Hex is On’ an they also put out a 12″ single called “Nobody Sleeps”. Witch was featured in the MCA movie ‘Radio Active Dreams’ and even appeared in Larry Flynt’s Hustler Magazine. These guy’s where known for their on, and off stage, wild antics that made others like Motley Crue and W.A.S.P. seem like alter boy’s. This underground band was a force to be reckoned with.