Accept founder and lead guitarist Wolf Hoffmann was recently interviewed by Andrew Catania for All That Shreds. 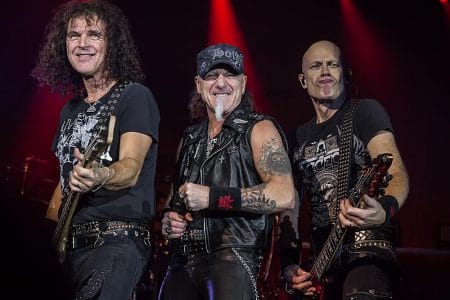 Hoffmann was asked about how it was like working with lead vocalist Mark Tornillo to which the guitarist replied (with slight edits): “Great! He’s become one of the main blocks of who we are now. Most people don’t realize this, but Mark has been in Accept longer than Udo ever was because he’d he leave and come back several times. People might not know that cause it wasn’t publicized much back then. He’d leave, change his mind and come back. With Mark, I believe we’re at a good, solid point in our career making strong albums and going on tour.”

In terms of what contributes to Accept‘s longevity, Hoffmann opined: “Stubborn persistence?  I’m sort of obsessed with what I do. I give  120 percent all the time. I do something at full force, or I don’t do it at all. I know there was a period in our life where we stepped away from music, and now that I’m back into it for the last ten years, that’s all I do. Nonstop. Twenty four hours a day.  That’s how we work.”

You can read the rest of the interview with Wolf Hoffmann at All That Shreds.