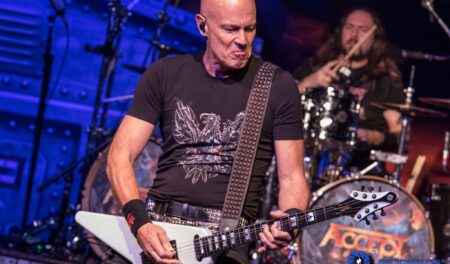 Accept guitarist Wolf Hoffmann was recently interviewed by Andrew Daly for Metal Castle. Accept completed their long awaited tour of North America earlier this month. The tour did have a few hiccups when singer Mark Tornillo had to sit out a few shows due to a viral infection. After performing one show without a lead vocalist, Accept cancelled their next show before performing the rest of their tour stops with Dangerous Toys and Dirty Looks frontman Jason McMaster handling the lead vocals until Tornillo‘s return. 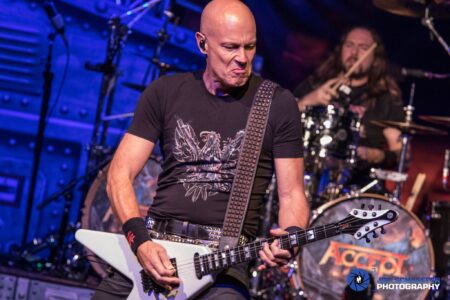 In terms of how Tornillo is currently doing, Hoffmann indicated: “Oh, he’s fine, man. He’s back in business. He has done just three shows in a row, and he’s as strong as ever. It was just a temporary setback due to a little viral infection on the road, which kind of happens, unfortunately.” With respect to the challenge of performing live without a lead vocalist, Hoffmann stated: “I guess the main challenge is having the balls to do it. Because we rehearse like that a lot, we know what it’s like because Mark isn’t always there when we rehearse. But of course, we’ve never done that in front of an audience, but we figured we could all just pack up and go home, or we could just give the audience something enjoyable, even if it’s not what we wanted to do initially. So, it wasn’t perfect, but at least it’s something, and I think it was very much appreciated.”

Hoffmann was asked for his opinion on many of his peers using backing tracks in a live setting. The guitarist opined: “It’s tough, and honestly, I don’t know what to think anymore. I think it’s almost become a standard for up-and-coming bands, like the new-generation metal bands, the laptop, and kids; they all use them. And I guess their audience doesn’t seem to mind, but our audience is old school, and they want to see an old school band that plays their instruments.

So, I think it would not be a good idea for us, and we’re staying away from that. We’ve never used backing tracks, and we probably never will. But I know it’s an ongoing development that is almost becoming the norm with a lot of bands. And you can look at it from a lot of different angles, but we’re going to stay away from it. I don’t think it would be the right thing to do for Accept. And luckily, we have a singer in Mark Tornillo who can still sing in the original key, so we don’t need to mess around with that stuff. We’re staying away from it, and that’s what we plan to do forever.”

You can read the rest of the interview with Wolf Hoffmann at Metal Castle‘s website.