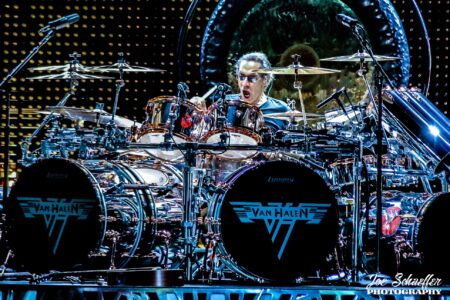 Kohn asked Wolfgang Van Halen whether his uncle and Van Halen drummer Alex Van Halen was playing with David Lee Roth during the latter’s upcoming final shows in Las Vegas, Nevada, USA from December 31, 2021 to January 8, 2022. Wolfgang replied: “I don’t think so…” When Kohn noted that Roth indicated that, Wolfgang noted: “Yeah, I know. I don’t know about that [Laughs].” In terms of getting information from as close as a source as possible, Wolfgang indicated: “Well, I’m not talking for Al [Alex Van Halen] or anything, but I haven’t heard. I haven’t talked to Al about it, but I mean, that doesn’t really seem like something Al would do.”

Wolfgang added: “The thing with Van Halen that people should have learned right now is that if it doesn’t come from them, it’s not true. And Al has not made any public statements about this. So I wouldn’t expect it. If he didn’t say it, it’s probably not true. People love to talk about dad and the way he ran the band, but that’s not really true. Al’s the kind of the one who was in charge and in the way that the band publicly sort of related.”

You can read the rest of the interview with Wolfgang Van Halen by Daniel Kohn at SPIN‘s website.