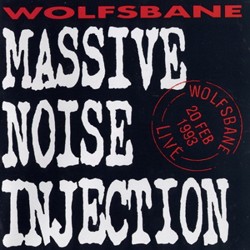 Wolfsbane have remastered their 1993 live album ‘Massive Noise Injection’ and have included the bonus tracks “Hollow Man” and “Want Me All The Time”, originally only available on a limited edition vinyl version of the album. The disc, as well as earlier remasters of ‘Live Fast Die Fast’, ‘Down Fall The Good Guys’ and ‘All Hell’s Breaking Loose Down At Little Kathy Wilson’s Place’, can be ordered direct from Wolfsbane at www.wolfsbanehms.com.

From becoming the biggest band in Tamworth, England to the biggest unsigned metal band in the UK, Wolfsbane’s reputation grew. The band signed a deal with Rick Rubin’s Def American Records and made their first album, ‘Live Fast, Die Fast’, at Sound City Studios in Van Nuys, California. After recording this and playing some small gigs in the UK they went on to support Iron Maiden on their sold out UK tour along with releasing ‘All Hells Breaking Loose Down at Little Kathy Wilson’s Place’. They carried on to release ‘Down Fall The Good Guys’ that was recorded at Abbey Road in 1991. After a live album, ‘Massive Noise Injection’, and the next eponymously titled studio album ‘Wolfsbane’, the band split when vocalist Blaze Bayley left for a stint as Bruce Dickinson’s replacement in in Iron Maiden.

In 2011 the classic line-up of Wolfsbane — Blaze Bayley (vocals), Jeff Hateley (bass), Jase Edwards (guitar) and Steve ‘Danger’ Ellett — returned with a new EP called ‘Did It For The Money’ followed by a full-length studio album entitled ‘Wolfsbane Saves The World’ in 2012.