Tesla‘s long-time guitarist Frank Hannon was recently interviewed by Don de Leaumont of The Great Southern Brainfart and spoke about the recording of the band’s last studio album Simplicity and how things are different with new producer / Def Leppard guitarist Phil Collen. 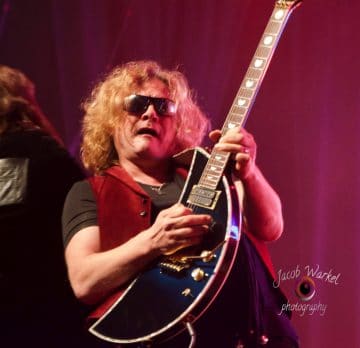 With respect to how things have changed with Collen in the producer chair, Hannon advised: “It’s funny that we segued into this question because the direction that we’re going in with Phil is totally different. It’s great, in a way, because I do love a challenge and I love to learn. Phil has learned a lot of recording techniques from their producer Mutt Lange who’s one of the greatest producers in the world. The approach that we’re taking on this new record is almost the opposite of what we were just talking about. It’s a lot more detailed and a lot more tedious in detail but it does produce a sound that is very pleasing to the ear. It’s perfectly in tune and polished so it’s a whole different direction that we’re taking on this new record.”

In regard to whether Collen‘s arrival has impacted the songwriting as well, Hannon stated: “It’s just coming into the entire aspect of the songwriting. Like, we’ll have a song idea that will start in one place and by the time the band and Phil gets a hold of it and trying different things and taking the time to actually develop it into something, it’s definitely a more developing process on this record and it’s affecting the whole thing. It’s different and it’s pretty cool. It’s still a learning curve for me to try not just settle for something.”

You can read the rest of the interview with Tesla guitarist Frank Hannon at The Great Southern Brainfart.

TESLA – Save That Goodness