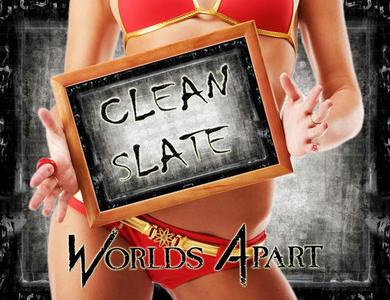 WORLDS APART SET TO RETURN WITH A ‘CLEAN SLATE’

Perris Records/TSM Promotions is proud to announce the return of Worlds Apart with a new studio release “Clean Slate”.

The official release date for the CD is Jan. 12th, 2010. CD is now available for pre-order at www.perrisrecords.com.

Worlds Apart, who have performed and recorded together since the early 90’s is a powerful melodic rock band from the San Francisco Bay Area. Worlds Apart has released 3 CDs on Perris Records as one of their top selling artist. Since the beginning Worlds Apart has played to sold out crowds, headlining as well as directly supporting many national acts such as Dokken, Y&T, Night Ranger, Cinderella, Firehouse, Zakk Wylde, MSG, Montrose, Bang Tango, Enuff Znuff and many others.

Bass player JAS had this to say about the deal -“Worlds Apart is extremely proud of their new CD “Clean Slate” and looking forward to an exclusive release with Perris Records worldwide. We have worked with President Tom Mathers for over 15 years, and now Perris Records has Rocknation TV and newspaper to reach fans worldwide.”