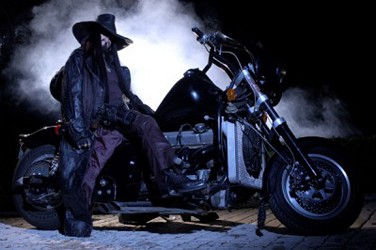 HighVolMusic has announced that Mandy Lion has signed a worldwide deal with the label which will include a collaboration with Roy Z on future song writing, recordings and live shows.

Mandy Lion is set to bring his signature brand of metal to the world once again with a stellar line-up backing him. Songwriting for the next Mandy Lion project is underway with the new material scheduled for release in early 2013 on HighVolMusic.

Says Mandy Lion, “I am honored and pleased to announce my collaboration with HighVolMusic, a company run by stellar gentlemen with drive and vision to move forward in a modern business model. I would like to thank Bill and John for inviting me to be apart of their tribe. I am looking forward to a long and successful partnership!”

HighVolMusic VP of A&R John Guarnieri comments, “In a field dominated with egos, it was a breathe of fresh air to get to know Mandy Lion over the course of these last months. From our initial meeting at the Rainbow in LA, to recently hanging out in Maryland at Rock Harvest, it was clear that Mandy is a class act. His music speaks for itself, but it was his charity work that blew me away, whether it is for dog rights, Veterans, or Police, Mandy is always ready to lend a hand. It’s going to be a blast working with Mandy at HVM, as we have some great things planned. The music community will once again hear the roar of the mighty Lion!”

Fast forward to 2013, Mandy Lion is solo and better than ever ready to take the world by storm. Pure no-nonsense hard rock with no compromise. Sexy, dark, aggressive and captivating, like no other. His recent sold out performances at the House of Blues Sunset Strip and Key Club in Hollywood, California more than solidified that Mandy Lion is back and taking no prisoners.

Guitarist, songwriter and producer Roy Z is most notably known for his work with Bruce Dickinson (Iron Maiden), Rob Halford and Judas Priest. He also is the founder of Tribe of Gypsies, a hard rock band with Latin influences.