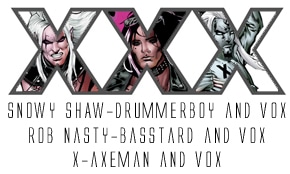 To quote a piece of the lyrics for Hello!:
“Hot tramps and Teenage vamps, Goth-Girls and all their sisters,
Tomboys and Mama’s boys – I want to see you here”

Hell yes! We do want as many people as possible to show up and to be filmed and be included in the crowd for the video. Dressed up and hot preferably!

The video is planned to be shot outdoors on location Gotaplatsen (at the top of the Avenue, Gothenburg) Saturday September 13th – noon 12.00 sharp. Spread the word! – tell your friends to tell their friends…

“Heaven, Hell or Hollywood?” was mixed by Andy La Roque in Sonic Train Studios. And produced by Snowy Shaw and X.

The bands agenda is to write glitter rock hitsongs and to put on live performances so great that all the girls wanna fuck them and all the guys wanna be like them..

You can listen to 4 songs from the upcoming album “Heaven, Hell or Hollywood?” on the band’s MySpace: www.myspace.com/xxxsweden