Making it in the music business can take many sacrifices. XYZ bassist Pat Fontaine was interviewed by Hall Laurel for the book Soundtrack of Our Youth: History of Hair Metal Music, which was recently released and is available in Kindle and paperback formats. Fontaine was asked whether XYZ members really slept in a care when living in New York. 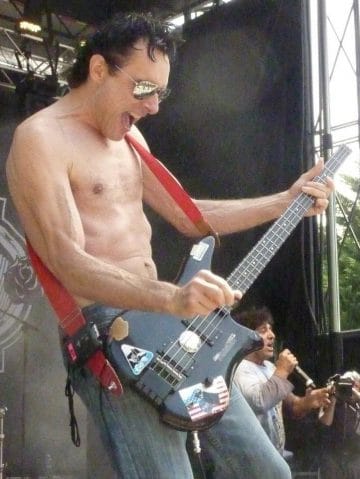 Fontaine replied: “We landed in NYC with nothing but guitars…but guitars don’t keep you warm at night do they! So after a few nights of sleeping at JFK airport, we opted to buy a station wagon and turn it into a bedroom, lol. I had to sell my beloved Rickenbacker 4001 to do so but we found a junker for 300 bucks from some seedy private party in a back alley in Bridgeport CT. It just had a for sale sign written in chalk on the windshield. One wheel was angled funny and the car wobbled painfully as it went.

It reeked of cigarettes and who knows what else!!! Was it stolen? No idea! We never bothered to register it, nor to insure it or anything of that sort. It was an AMC Ambassador, yellow in color, with a huge cargo space, perfect for a few sleeping bags. We lived in it throughout the summer of 1982, mostly parking at rest-areas and truck stops up and down I-95, in NY, NJ, CT. But didn’t drive it much because we couldn’t afford much gas.

We got pulled over once by highway patrol and were given all kinds of citations for this and that, and all that paper work went in the glove compartment never to be seen again, lol. We only had our French drivers licenses and no physical residence, what are they gonna do ?

When winter came, California seemed like a much better idea. I sold the Ambassador for $200 cash to a junk yard, as I was told they rarely ask for proof of ownership. With that money we somehow managed our way to LA and some needed sunshine. We slept on Venice beach for weeks because the sand is softer than concrete and they had cold showers on the boardwalk. Then we squatted for a year or so in a condemned house in Hollywood, all boarded up, until the wrecking ball came one morning. For power we had borrowed a long extension cord from the rock n roll neighbors. And water? What water, lol!

Eventually I scored a part time job delivering flowers and managed to save enough tips to afford first and last on a two-bedroom apartment on Fountain Ave, two blocks from Guitar Center. It was spring of 1984 and that’s where I would live for the next 30 years. I moved to Las Vegas in 2014.”