XYZ bassist Pat Fontaine was recently interviewed by Andrew Daly for Vinyl Writer Music. XYZ released the albums XYZ (1989) and Hungry (1991) before their first chapter came to an end in 1992. 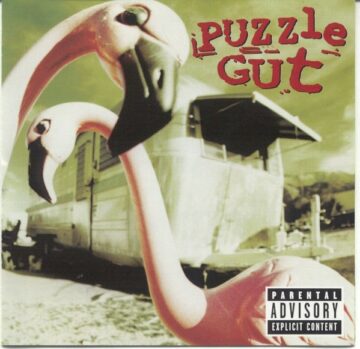 In terms of what led to the band disbanding at that time, Fontaine indicated: “Yes, indeed, end of ‘92 we went home after a club tour, and just by watching Nirvana and Stone Temple Pilots on constant rotation on MTV, we thought it would be wise to hang our hats for a while. So we did. Curtains. Lights out. We split. We all went different ways, different cities, different states. I find it difficult to stay put for too long, so for the sheer fun of it, I started a little jam session with a few friends, and that somehow morphed into Puzzle Gut.”

Puzzle Gut released one self-titled album in 1997. Daly suggested that the songs from that album was closer to the music coming out in the ’90s and he asked Fontaine what his opinion was in that regard to which the bassist replied:

“What I love most about the music biz is playing live, so I really wanted to get back on the road with some kind of band. At that time, no one in Hollywood was looking for a rock bass player, so I convinced two madmen to help me create Puzzle Gut as a road band. With the most basic gear, a small vehicle, and only the bare minimum, we set out to burn the house down. It was all about energy and attitude — in your face! We played the clubs up and down the pacific coast, a great time, with tiny crowds. It was Joe Shapiro on drums, fresh off the XYZ bus, and Lance Bulen on guitar and vox, who had just walked out of Baton Rouge — the band and the city.

We did not care about the radio format, the trend of the day, or whatever was on MTV. We just wanted to play dives, and yell into a microphone, and so we did. Strangely enough, that disregard for all formats worked well enough that Interscope signed us up just two years into that mad experiment. Super quick for the biz, and just like that, we were making a record in Santa Monica, prepping for the Roar Tour with Iggy Pop, and then, we were off playing stadiums that were packed with much younger people. Man, it was actually a wonderful time. The energy was on 100%.

Now get this, we are today considering releasing a few Puzzle Gut never-heard songs that we wrote on the road, banging on the steering wheel of our Chevy Astro Van, during the late 90s. Stay tuned on that, we shall see!”

You can read the rest of the interview with Pat Fontaine at Vinyl Writer Music‘s website.