XYZ band co-founder and bassist Pat Fontaine was interviewed by Angel Alamo for Ball-Buster Music at the M3 Rock Festival, which took place in Columbia, Maryland, USA from May 3 to 5, 2019. 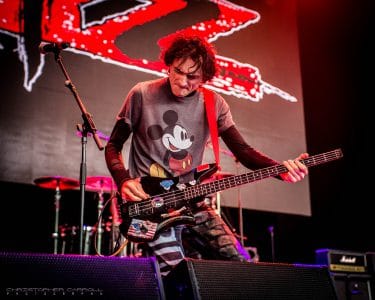 Fontaine was asked when fans can expect a new song from XYZ to which the bassist replied:

In terms of whether XYZ have a producer for their new material, Fontaine advised:

“Yes. We actually involved with the label now we’re talking to a US label. They’re not as present as it was back in the 80s when we on a major label, there’s no major label anymore unless you have a mini skirt and you’re 16 years old, you’re not going to get on a major label. So the labels that exist are independent and the people that got into this independent business are people that really love it and love the artists and the music so they can kind of tend to give you more freedom. Then the big labels of the eighties so we do have some freedom but we also kind of, you know, under the impression that I, one point you got to report to someone, you can’t just be completely obnoxious about things because you kind of wants to get on the radio here and there. You want to do some press you want to kind of fit a little bit of a jaw if you will. So we do have a producer that comes in and not every day that he’s not a dragon. It’s more like a guy that shows up once a week and tells us, “Hey! you know, I like that, that song’s not so great. Can you guys redo this? Can you redo that?” That type of thing. Pretty cool.”

You can read the rest of the interview with Pat Fontaine at Ball-Buster Music‘s website.