About a month after getting let go with little to no apparent warning, former Great White lead vocalist Terry Ilous and bassist Patt Fontaine are reportedly putting the band XYZ back together as can be seen in the comical video below.

XYZ – Were on a mission

Wikipedia states the following in part about XYZ (with slight edits):

“XYZ was originally created in Lyon (France) where Patt Fontaine and Terry Ilous were born and grew up. Then they 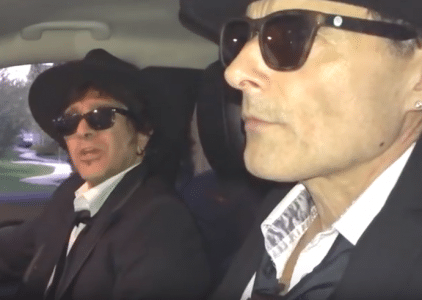 moved to Los Angeles, and began a musical career in 1986. XYZ started off as the unofficial house band of “The Whisky A Go Go” nightclub in Los Angeles. The original members were Terry Ilous (vocals), Bobby Pieper (guitars), Patt Fontaine (bass) and Joey Pafumi (drums). A tour of the US with Enuff Z’Nuff and Alice Cooper followed the success of their 1989 Enigma released debut album, and they were signed by major label Capitol for their second.

The band played clubs throughout the mid 1980s and first got a record deal in 1989 with Don Dokken as their producer. Terry Ilous‘ vocal style on the band’s first album was very similar to Dokken‘s. Ilous and Fontaine then recruited Mark Diglio (guitars) and Paul Monroe (drums) to replace the departing Pieper and Pafumi, to record a debut album, produced by Don Dokken. The album was released in 1989 and contained the hits “Inside Out” and “What Keeps Me Loving You”. Videos for both songs received reasonable airplay; however, the album itself was not an overall success, managing to reach only No. 99 on the Billboard charts. A third single from the album, “Maggy” was used in the 1990 Dolph Lundgren movie I Come in Peace. The next album, Hungry, released in 1991, had even less commercial success—not charting at all. Diglio and Monroe left the band and were replaced by Tony Burnett and Joey Shapiro, respectively. After the next tour was finished, band members went separate ways once again. They reunited in 2002 with the lineup of Ilous, Fontaine, Tony Marcus, and Shapiro, and still perform to the present day.”

Taken from “XYZ”, the 1989 self-titled debut album released by the mid-1980s American glam metal band XYZ. There were two hits off the album; “Inside Out” an…