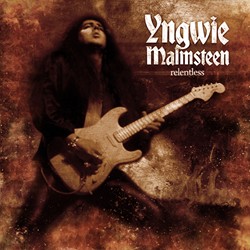 The CD contains more than 60 minutes of brand new material and showcases the guitar great at his best with the signature virtuosity and mind-blowing technical speed for which he has come to be known. “Relentless” also features striking vocals from Tim “Ripper” Owens (JUDAS PRIEST, ICED EARTH), who first collaborated with Malmsteen on 2008’s critically-acclaimed “Perpetual Flame” (Malmsteen’s first album for the Rising Force Records label).

Of the new album, Malmsteen commented, “The album title really says it all. The drive to surpass my own accomplishments can best be described with one word — relentless. After all these years of composing and playing music, I still am passionate about pushing myself to the limit — to the highest, most demanding level of playing possible.”

For nearly three decades, Grammy-nominated Swedish guitar icon Yngwie Malmsteen has been amazing audiences with dazzling technical speed and ability. Malmsteen’s signature style of playing, which combines elements of seemingly disparate styles of music — metal and classical, spawned the now commonplace genres of heavy metal known as “shred guitar” and “neo classical” and earned Malmsteen the title “the Paganini of heavy metal.” Malmsteen was the first guitarist to have his own Fender signature guitar model (even before Eric Clapton). He has graced the cover of more than 200 magazines worldwide, has won every guitar award imaginable and to date, has sold millions of records. Time recently named Malmsteen one of the “Top Ten Greatest Electric Guitar Players,” an honor he shared with the likes of Les Paul, Jimmy Page and Jimi Hendrix. “Guitar Hero” enthusiasts know they have arrived when they are bestowed with the Yngwie Malmsteen award in the Xbox 360 version of “Guitar Hero 2”. The award signifies a 1000-plus-note streak in succession.

Malmsteen released the “Raw Live” DVD on June 29. According to a press release, the set “provides an unprecedented and unique look at the rise of a guitar god. Spanning from 1981 through 1999 and encompassing extremely rare footage of Yngwie’s early years in Sweden, this video displays the infancy of Yngwie’s prodigious skills well prior to his first worldwide album and travels through Yngwie’s masterful career, including his masterful performances from his first solo albums, ‘Rising Force’, ‘Marching Out’, and ‘Trilogy’. Also included in this unique video are never-released behind-the-scenes footage of Yngwie and newly shot personal touches of Yngwie which open up the viewer to a side of the guitar maestro which is rarely seen by the public.”