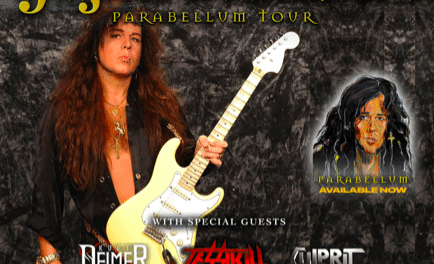 Guitar virtuoso Yngwie Malmsteen has announced US dates for his Parabellum Tour with special guests Jessikill, Deimer and The Culprit. Malmsteen released his studio album Parabellum back on July 23, 2021. 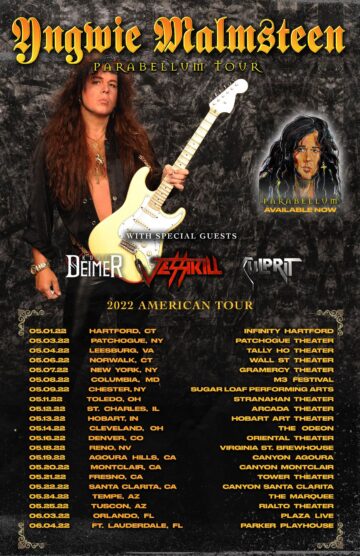 “Texas heavy metal band, Jessikill, will be jumping on the road in 2022 with the legendary Yngwie Malmsteen on a 2022 American Theatre Tour.

“We couldn’t be more excited to go on tour with Yngwie Malmsteen. We’ve missed seeing our friends on the road and the energy of performing live.” Jessikill’s bassist Arturo Knight said in a statement.

The month long theatre tour kicks off May 1st in Hartford, Connecticut and circles the nation before concluding June 4th in Ft. Lauderdale, Florida.

Sleaze Roxx stated the following in its review of Jessikill‘s EP Metal Knights, which was released back in January 2016:

“One release that had me more and more intrigued over the last few months has been Jessikill‘s “debut” EP Metal Knights. I first found out about singer Jessica Marie Espinosa aka Jessikill back in February 2014 when she was announced as the new lead vocalist for the Chicago, USA based heavy metal group Hessler. I was blown away by Jessikill‘s voice as soon as I heard Hessler‘s first single “Never Lost My Way” and Hessler‘s Ghost Dance EP ended up as the number three album on Sleaze Roxx’s Top Ten Albums of 2014. Jessikill‘s voice was also amazing live as I witnessed myself while she fronted Hessler. Unfortunately, Hessler with singer Jessikill at the helm did not last with the diminutive but powerful singer finding romance with now current Jessikill lead guitarist/keyboardist Jyro Alejo (who is apparently based in her hometown of San Antonio, Texas, USA) and eventually choosing to continue only with the band bearing her name.”

Sleaze Roxx concluded in its review: “Overall, Metal Knights is an enjoyable EP although it sometimes feels that the band has not quite conquered how to balance and integrate Alejo‘s guitar shredding wizardry into the classic heavy metal songs that the group has to offer. I feel the best is yet to come for Jessikill. If you’re interested in purchasing the Metal Knights EP, the best spot appears to be via the group’s website.”